The second soliflore from Le Galion is Tubereuse and it was these creations of specific soliflores that inspired perfumer Paul Vacher to branch out on his own. As a perfumer he was drawn to the creative challenge in essentially creating a perfume featuring one singular note. What I have always enjoyed is seeing the different visions every perfumer brings to their version of a fragrance of a single flower. M. Vacher’s vision for Tubereuse is very different than most other tuberose soliflores out there. Tuberose is a floral that is hard to like, for many, and one of the reasons they will cite is that it is too much, too bold, too flowery. In short tuberose is a pushy note. M. Vacher wanted to display a softer side of tuberose and he has made a downy soft version of it in Tubereuse. 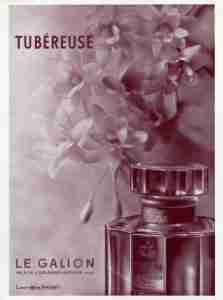 M. Vacher, I believe understood that the natural exuberance of tuberose, if turned inward, could create a special effect and so the construction of Tubereuse is all about taking the showy aspects of tuberose and calming them down. The taming of tuberose starts with a fruity foil of raspberry and pear. You might think this would make the tuberose sweeter but it has an effect here of adding a crisp fruity quality more than sweetness. Galbanum and mandarin also provide opposition to the sweeter nature. It takes all of this to keep tuberose from getting out of control and it works surprisingly well. In the current day of fruity florals this exudes a sophistication not often seen within the genre. Tuberose displays its floral charms in the heart but it also has competition from rose and orange blossom to, again, temper the tuberose. The base uses cedar to add a clean woody outline to allow amber and musk the opportunity to welcome tuberose to the finish.

Tubereuse has 8-10 hour longevity and modest sillage, unusually modest for a tuberose fragrance. If you’re looking for an office friendly tuberose this might be the one. 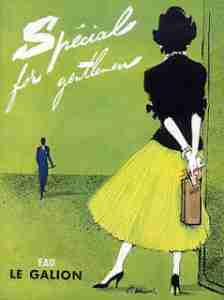 There are three of the nine fragrances in this re-launch of Le Galion which were able to be re-made from M. Vacher’s original recipes, 1947’s Special for Gentlemen is one of them.  At this point Le Galion has survived World War 2 and France was beginning its post-war revival as the center of style. M. Vacher has positioned Le Galion as a major perfume player in that. Along with Jean Carles he would create the iconinc Miss Dior also in 1947. For his own line he wanted a gentlemen’s fragrance that also exhibited a savoir faire. I wonder if he envisioned a stylish Parisian couple wearing these two fragrances walking alongside the Seine as he composed Special for Gentlemen. It is definitely a throwback to a time when men wanted a fragrance that was less clean and had some oomph to it.

Special for Gentlemen opens on a duet of lavender and galbanum. I like this combination a lot as galbanum reminds me that lavender has a bitter underpinning lurking underneath the more familiar floralcy. Cinnamon and labdanum hold the central part of the development and as with the tuberose in Tubereuse M. Vacher makes the cinnamon atypically soft. The use of the labdanum is what makes this work as it provides foundation for the cinnamon to push against. The base is castoreum modulated with a bit of vanilla, oak moss, and patchouli. This is the kind of animalic finish masculine fragrances had until the words “Sport” started showing up on bottles. Special for Gentlemen reminds me how much I miss those perfumes and how happy I am that the pendulum might be swinging back a bit.

Special for Gentlemen has 6-8 hours of longevity and moderate sillage. This is for a night out on the town.

Disclosure: This review was based on samples provided by Le Galion.