One of my favorite things which happens in the background of my writing about perfume is one of the great reasons why I do it. I am often approached to try a young independent perfumer’s creations and to give my opinion. I am thrilled to offer any assistance I can especially to those who choose to try this on their own. This is how Dana El Masri and I have struck up an ongoing conversation on the perfumes she was working on. Her idea was to take a musical inspiration and turn it into a perfume. After her training at the Grasse Institute of Perfumery she knew the work necessary to see her ideas through to a finished product and it is very pleasing to see her dreams become reality. Her line is called Jazmin Sarai and she has assembled a very strong debut playlist. 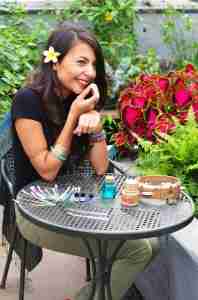 Otis & Me is inspired by Otis Redding’s “Cigarettes and Coffee” from 1966. Ms. El Masri wanted to capture an imaginary conversation between the wearer and Otis in a diner in the wee hours of the morning in a time when smoking was still permitted. What she has done quite brilliantly is to make a fragrance which rasps, like Mr. Redding’s voice, with a world-weary omniscience. It is surrounded with the richness of coffee and the haze of smoke. She blends black pepper, cardamom, and bergamot into a spicy grittiness which opens into a Turkish rose coated with incense over a rich coffee base. All of this is perhaps a bit too grand for a diner but one can’t be faulted for imagination, can they?

How You Love is inspired by Sade’s “It’s Only Love That Gets You Through” from 2000. This is the yin to Otis & Me’s raspy yang as How You Love is the smooth soulful voice that plumbs unexpected depths that Sade provides to her singing. Ms. El Masri uses cardamom again but this time a greener version of it and pairs it with grapefruit as we start on the high end of the olfactory scale. The heart notes drop an octave as Moroccan rose and Indian jasmine swirl together with a soulful harmony. The base notes drop into those low notes that become a trademark of Sade as How You Love uses sandalwood and musks but the really excellent choice is to capture it in a substrate of beeswax still redolent of the honey that recently surrounded it. This is the vocal range of Sade from high to delightful low.

Neon Graffiti is inspired by M.I.A.’s “Sunflowers” from 2004. When she first gave me this to try in an early version she told me to think of neon on wet cement. In that early mod there wasn’t enough crackle of electricity and the cement felt a bit lifeless. What has emerged as the finished product has none of those issues as there is a palpable sizzle of humming neon over damp cement. Ms. El Masri accomplishes this by using cardamom and grapefruit again but chilling them out with mint and ivy. Jasmine, mimosa, and sunflowers form a burst of rainbow florals and they are made neon bright by adding in juicy mango. The cement accord is ambrox, cedar, and incense and it is very well executed. Neon Graffiti feels like the fusion of disparate energies the best hip-hop provides. 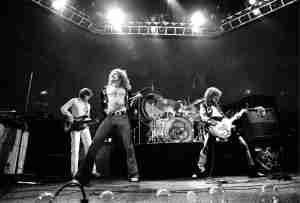 Led IV is inspired by Led Zeppelin’s “Going to California” from 1971. Led IV is my favorite of this set of four fragrances and it because Ms. El Masri has perhaps made the first perfume which really captures the heart of rock and roll. One of the reasons this works so well is Ms. El Masri keeps it simple and lets each note contribute to the olfactory band. Grapefruit and bergamot are Robert Plant’s vocals brilliant and high. Davana provides the boozy guitar of Jimmy Page. John Paul Jones plucks the mandolin as patchouli wafts from the crowd and underneath John Bonham keeps the beat with guaiacwood and musks. Together this creates a perfect moody rock vibe that is unforgettable.

I’ve sort of known about the talent Ms. El Masri has had and have been keeping it to myself. With the release of these four fragrances she is ripe for discovery by everyone who loves perfume and music. She truly gets it. Now when are you going to finish that Hendrix one?

Disclosure: This review was based on samples provided by Jazmin Sarai.

One thought on “New Perfume Reviews Jazmin Sarai Otis & Me, How You Love, Neon Graffiti, and Led IV- Songs in the Key of Scent”