While the three new releases from Amber Jobin’s Aether Arts Perfume were my first new perfumes of 2015 I can’t say I didn’t know they were on their way. Ms. Jobin like so many of her compatriots in the independent perfume world shares her thoughts on how her new designs are coming along online. Ms. Jobin’s posts give us a peek into her creative process and I always like taking my first sniff knowing a bit about how the perfume came to be. The two I am reviewing here Magic Mushroom and Love for 3 Oranges were Ms. Jobin’s forays into gourmand and eau de cologne territory. 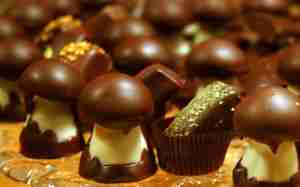 Magic Mushroom seems like it should be a natural companion to the other new 2015 perfume Holy Hemp! Instead Ms. Jobin was after another mood altering substance to build this mushroom, chocolate. She takes cocoa absolute which, instead of adding the slightly dusty quality of cocoa, it forms a more viscous base of melted chocolate. Floating on that metaphorical pool are freshly harvested mushrooms with the earth still clinging to them. On the days I wore this I kept imagining the weirdest chocolate fountain with mushrooms floating in the bowl at the bottom. Ms. Jobin describes Magic Mushroom as an earthy gourmand and, especially in the first part of the development, it is exactly what this perfume delivers. She leavens the rich opening with a bouquet of jasmine and orris. It adds a bit of high harmonics to a perfume which has been all bass to this point. Coffee and tobacco absolute return Magic Mushroom to the lower register and transform it into something trending more sweet as the chocolate has the upper hand over the final phase. Magic mushroom has 8-10 hour longevity and slight sillage due to being extrait strength. 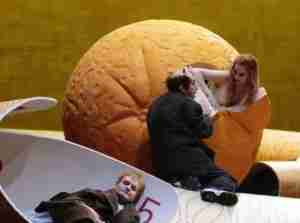 Love for 3 Oranges was inspired by Prokofiev’s opera of the same name. The opera was staged to be a cross between Commedia dell’arte and Surrealism. Needless to say it flew over most audiences' heads when first performed in the 1920’s. As Surrealism rose in prominence so too did the opera and it has become one of the staples of the opera company repertory. Ms. Jobin heard about the staging in 1988 which provided the audience with Scratch n’ Sniff cards to go along with the action on stage. One of those dots was the scent of oranges which was matched to fairy princesses emerging from giant oranges as if they were cocoons. Mixed into all of this were memories of Ms. Jobin’s memories of her grandmother’s orange trees at her home in Florida. You will be unsurprised to know the Florida boy in me was particularly interested in that. 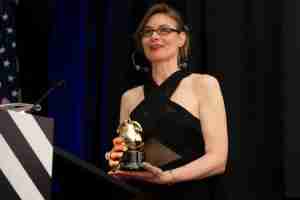 She has subtitled the fragrance “Flower, Fruit & Tree” to indicate she wanted to capture an orange tree where the orange blossoms and the fruit were all growing at the same time. By choosing to go with an eau de cologne architecture at extrait strength Ms. Jobin eschewed the surreal aspect and instead went for a “whole body” approach to capture that tree with all three phases in it which describe the three phases the perfume goes through on my skin. It opens with that lush juicy orange smell. The one I remember from my Florida childhood eating one while sitting on a limb in the tree. I also remember the smell of the tree when it was full of blossoms as that was the smell of Spring to me when living in a part of the world where it might always seem Spring. Ms. Jobin uses a high concentration of orange blossom and it really brings out the creamy quality of the raw material. Most often it is used as a light bit of floralcy. Ms. Jobin has to use a lot so it can co-exist with the orange from the top. Her success is that I would imagine myself in my tree at both times I described at the same time. Getting orange and orange blossom right is easy the smell of an orange tree is not so easy. It is woody but it also has a bit of an acrid edge to it and Ms. Jobin’s orange tree accord captures that. She blends some green notes with woody base notes. This would not have been a trivial task, I think. This is a simple perfume but it is not a simple to make perfume. Ms. Jobin shows her skill throughout in getting all of the players to create the effect she wanted. In the end for this Florida boy she has spectacularly captured any orange tree I have ever known. Love for 3 Oranges has 10-12 hour longevity and moderate sillage.

Ms. Jobin continues to shine brightly as one of the best new independent perfuers we have and all three of her new perfumes have begun my 2015 on a high note.

Editor's Note: My review of the other 2015 release Holy Hemp! can be found here.