When two creative people you admire team-up you probably expect to find something that is more than the sum of its parts. It has been one of the characteristics of the creative direction Victor Wong has produced for his Zoologist Perfumes brand. I think he has helped the independent perfumers he collaborates with to produce some of their best perfumes ever. In the perfume whisper stream, I had heard that one of the most creative independent perfumers, Antonio Gardoni, and Mr. Wong were trying to find a way to team-up on a perfume. The rumors have been realized as Zoologist Tyrannosaurus Rex has been released.

There are a few independent perfumers who have quite as distinctive a signature as Sig. Gardoni. He was the unnamed perfumer for a different brand and the aesthetic nearly screamed his name when you tried it. Until he was revealed as the perfumer he must have become bored with being asked if he was. Sig. Gardoni has excelled at opening phases which are compelling. If there has been a consistent drawback it is the rest of the perfumes sometimes suffer from a clutter of ingredients heading off in many directions. My hope was that Mr. Wong could be the kind of traffic cop who could keep the perfume flowing without jamming up. For the most part I think this is what takes place. 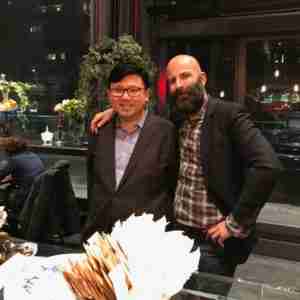 It begins with the bold opening I expected as twin pillars of smoke via cade oil and frankincense. This is amplified with notes of fir, and black pepper. This is acrid smoke the kind that makes you cough if you get too much. Sig. Gardoni captures the violence of air on fire. What twists it all is you also smell the flowers that are burning as champaca, jasmine, neroli, and ylang-ylang capture a primordial tropical milieu. It is a completely Gardoni style opening. Now the question was would this burn to the ground or soar. Mr. Wong does oversee a much more concise trip to the finish by concentrating on a set of woods and animalic ingredients to produce the giant dinosaur in the name erupting from the forest. It starts as cedar and sandalwood begin to push back at the smoke. A classically constructed birch tar leather accord joins in with civet to make the animalic accord. This is far less complicated than the typical Gardoni finish and much better for it.

This is by far the most avant-garde release from Zoologist. It is not going to be a crowd pleasing easy-to-wear style of perfume. It is also another example of how Mr. Wong can accentuate the positives of the perfumers he works with. Tyrranosaurus Rex is a show of creative force multipliers producing something amazing.