In the 1920’s the bright young things were writers, artists, and designers. After a Great Depression followed by a Great War those bright young things were up on the silver screen. The Hollywood Dream Factory was humming as the 1950’s dawned. Those movie stars were what the public wanted to hear about. As this new-found celebrity was thrust upon these pretty people there weren’t really any rules. So, they made up their own.

If you were of a mind to go catch the new celebrities one place you would end up is The Beverly Hills Hotel. More specifically it was the bungalows spread throughout the property which was where the action was. Bungalow No. 7 is Marilyn’s. La Liz and Dick loved, lost, loved, and lost in Bungalow No. 5. The bad boys were in Bachelor’s Row; Bungalows No. 14-21. Even Howard Hughes had his own which nobody knew whether he was there except for select hotel staff. It is fascinating to look back and think about anything like that happening in this TMZ world. Owner-creative director of Vilhelm Parfumerie Jan Ahlgren also shares my affection for this time. 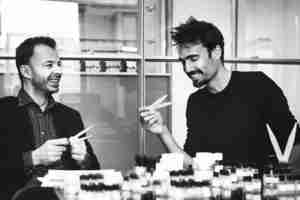 Mr. Ahlgren tasked perfumer Jerome Epinette to create a perfume which was all about that time but modern enough to be worn by a contemporary Liz or Marilyn. One thing I admire about the way M. Epinette interprets a brief like that is to keep it relatively simple. There are other perfumers that would have gone for shoulder strutting power. M. Epinette goes the opposite way looking for something more intimate. That moment when the door of the bungalow is closed and the persona can be dropped, a little bit. Just make sure there is a Do Not Disturb sign on the door which is also the name of this new perfume from Vilhelm.

I am not sure many would have thought of carnation as the core of a perfume like this but because M. Epinette was going for intimacy it works. Also, carnation is a key component of some of the great classic vintage perfumes so it provides that vintage vibe without overpowering.

Do Not Disturb opens with that carnation displaying its spicy floralcy. It has a classic feel which is deepened by the addition of clove to amplify the piquant nature of the carnation. Ylang-ylang is used to give a bit of a boost to the floral side of the carnation. Blackcurrant bud provides that sticky green effect which completes the vintage part. Do Not Disturb would have gone even deeper if this was a scent of the 1950’s. Because it is of the 2010’s M. Epinette uses a Haitian vetiver and papyrus as a way of drawing out the green thread begun with the cassis while adding in some expansiveness over the last part of the development.

Do Not Disturb has 10-12 hour longevity and average sillage.

These kind of story perfumes from this era seem to be a strength of Vilhelm in these early days of the brand. Do Not Disturb is another strong fragrance born from Mr. Ahlgren’s desire for his brand to be something a little vintage and a little modern when looking back. I know it’s impossible but I can imagine smelling a trail of Do Not Disturb somewhere along Bachelor’s Row or just behind a feminine figure with Marilyn’s laugh. This is an excellent evocation of the time and place.

Disclosure: this review is based on a sample provided by Vilhelm Parfumerie.