I’ve mentioned a few times that I am having some trouble fully embracing the transparency that seems to be the new trend in perfume. One of the things which keeps me hopeful is there have been some which have used the effect as something which to build upon. One of those brands is Starck Paris.

Designer Philippe Starck released three perfume in 2016, Peau d’Ailleurs, Peau de Pierre, and Peau de Soie. All three shared a quality of feeling like a translucent bubble of scent. Which felt appropriate for the brand of someone who grew up in his mother’s perfume shop. The aesthetic of those first three perfumes was to create these kinds of lighter constructs out of well-known material. I enjoyed the inherent fragility of all three. 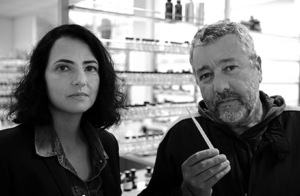 Two years later M. Starck is back with two new perfumes, Peau de Nuit Infinie and Peau de Lumiere Magique. If there was something I was not crazy about in the first collection was how hard the press copy tried to convince me these were something groundbreaking. That continues with the new releases. I’m going to cut to the chase as the perfumes represent night and day which is a better description than in the press release. I would further refine that that each perfume is meant to capture twilight and dawn. They both capture a moment when the dark or the light still has a little bit of the other present for just a moment.

Peau de Nuit Infinie is composed by Delphine Lebeau-Krowiak. The perfume opens with that dimming of the light as lemon and bergamot provide a citrus effect over a geosmin-like mineral accord. My favorite of the original three was Peau de Pierre which contained a wet river stone accord. Mme Lebeau-Krowiak goes for a drier mineral effect. The similarity comes in that it also shares the same opacity as in the previous perfume. It is wonderful to experience something as grounded as stone in an expansive bubble. The faint light of the citrus is extinguished by pepper and ginger. It leads to a leather accord which feels insubstantial until I realize it is still going strong hours later. There is some patchouli and vetiver to fully complete the transition into night. 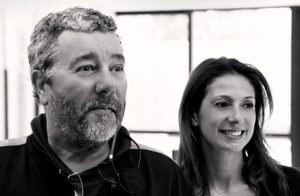 Peau de Lumiere Magique is composed by Daphne Bugey. In this case pepper represents the last tendrils of the night holding on as the citrus accord ascends. What it flows into is the promise of a floral morning as light airy versions of ginger flower and jasmine capture the coming day. The base is patchouli but a less earthy version which leads me to think a fractionation is being used. This is the spicy breeze of sunrise blowing across everything.

Peau de Nuit Infinie and Peau de Lumiere Magique have 10-12 hour longevity and little sillage. The entire Starck Paris collection seems to live up to the “peau” in their name as they are essentially skin scents.

I enjoy these perfumes as much as I liked the original three. I might be learning to embrace this diaphanous style of perfume if they are constructed as solidly as this collection has been.

Disclosure: This review is based on samples provided by Neiman-Marcus.