One of my favorite early niche perfume lines was one called S-Perfume which came straight out of the DUMBO art collective in Brooklyn. The creative director behind the brand was Nobi Shioya who is also known as sculptor Sacre Nobi. In 2000 he became fascinated with fragrance and worked with perfumers Alberto Morillas and Thierry Wasser to add scent to his sculpture. This would lead to a one-off project where he assigned one of the Seven Deadly Sins to a perfumer. Back in 2002 this was the roster he attracted, besides Messrs. Morillas and Wasser, Annie Buzantian, Jacques Cavallier, Ilia Ermenidis, Annick Menardo, and Harry Fremont. I would say that my little sample set of these Seven Deadly Sin perfumes was one of the earliest moments where I seriously began to consider the idea of olfactory art. Each perfume was challenging and the perfumers were encouraged to push the boundaries of perfume making. I can’t say any of them are anything I crave to wear but I do pull them out from time-to-time to appreciate them as artistic statements. Sacre Nobi would go on to produce two perfumes which would be sold in stores 100% Love by Sophia Grojsman and S-ex by Christophe Laudamiel released in 2007 and 2006 respectively. These were and are amazing fragrances I do wear and they are among the very best of both perfumer’s collection. 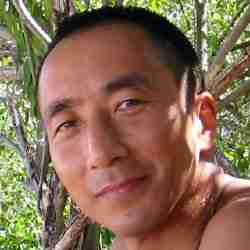 Sacre Nobi would say in 2008 that he was phasing out of his “fragrance period” and for a while that seemed to be the case. 100% Love and S-ex continued to be produced intermittently and the brand was never completely gone. In 2011 I heard Sacre Nobi was back and working on a new fragrance line A Lab on Fire. A Lab on Fire held all of the same principles that S-Perfume had giving perfumers wide latitude to create without commercial pressure. It has been one of my favorite new niche perfume houses of the last few years. Then a few months ago I received a press release announcing the return of S-Perfume with new bottles and four new perfumes added to the original two. Of the four new perfumes there was one I was zeroed in on right from the start Musk-S.

One of the very first S-Perfume compositions was an attempt to create the perfect sheer skin musk. Alberto Morillas created S-Perfume to be that back in 2000. Ever since Sacre Nobi has encouraged the perfumers to tweak that original formula trying to perfect it. Perfumer Carlos Benaim is the latest hand to evolve the original formulation and the result is Musk-S. I am not sure if perfection has been reached but it is getting much closer.

M. Benaim uses chestnut flower as the top note. In the original formulation this was around in much greater quantity as a method of discomfiture for the wearer. For those unfamiliar with the raw ingredient chestnut flower smells like semen. The higher the concentration the easier it is to make the connection. For Musk-S M. Benaim uses it in a much modulated form more as a nod to the original than anything else. A continued light mix of vanilla and bourbon add a bit of sweet booziness of the barroom. Once these preliminaries are out of the way we get down to the base note collection of synthetic musks. The original S-Perfume came off smelling more like a money shot from a pornographic movie. It was interesting but it felt miles away from where Sacre Nobi wanted it to be. This was also because M. Morillas had a lot of synthetic musks to use but not nearly the arsenal M. Benaim would have 14 years later. That is the key difference as M. Benaim has taken many of the more modern synthetic musks and layered them in to one of the most compelling synthetic musk skin accords I have smelled. There are still a few rough edges here and there which disrupt the illusion but they are slight and require attention to notice them. If I let my analytical mind take a nap they are really unnoticeable.

I am thrilled that Sacre Nobi has decided to start a second “fragrance period” the freedom he grants the perfumers he works with is unrivaled in the niche perfume business. Musk-S serves as a perfect first fragrance to kick off this new era as it borrows from the past to create a current spectacular synthetic musk perfume.

Disclosure: This review was based on a sample provided by Intertrade Europe at Pitti Fragranze.