I hate waiting. I was an impatient child. I’ve become better in my old age, but I still don’t like it. I am particularly bad about it when one of my favorite perfume brands makes me wait a year. Last December Puredistance released Warszawa exclusively at Quality Missala in Warsaw, Poland. When I contacted the brand about getting a sample I was told it would be released worldwide in November of 2017. Then a couple of my Polish readers told me how much they enjoyed it. None of this helped the wait go down any easier. Now that I have had the chance to try it I find Warszawa to be one of the most elegant retro nouveau perfumes I’ve tried in a long while. 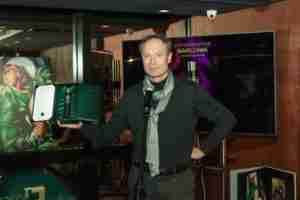 When we say they don’t make perfumes the way they used to I also tend to couple it with the idea of what passed for beauty back then. The perfumes and the women were curvaceous. There was contour to their structure as the eye, or nose, enjoyed the sensations of swooping in and out and around those curves. Warszawa was based on the Polish society women during that Golden Age. Creative Director Jan Ewoud Vos and perfumer Antoine Lie takes us back to a time where things had curves.

One of the great things about Mr. Vos’ creative direction is that it comes from a visual perspective. For Warszawa he visited with the Missala family in Warsaw and was shown the family pictures from this period. He walked away thinking about how to turn this into perfume. Working with M. Lie for the third time there is seemingly an easy creative rapport. The model they use for Warszawa is a floral chypre where the floral part feels very Golden Age but the chypre feels very modern.

The opening is a silk glove being drawn along a sinuous arm as candied violet and grapefruit provide a smooth opening. A big green emerald flare of galbanum transforms it into something more extroverted. The floral heart accord is made up of a deep jasmine absolute paired with a rich orris butter. Just those two notes would have been spectacular, but M. Lie adds in the broom flower which provides its own twists and turns as it swirls through the more extravagant florals. The broom adds in a softness as its herbal nature inserts itself within the overall effect; it gives a slightly acerbic nip. The base is patchouli and vetiver carrying the chypre frame while styrax tries to add into a contemporary form of the classic base.

Warszawa has 14-16 hour longevity and above average sillage.

Warszawa is a perfume which celebrates another time where a different aesthetic was ascendant. It is nice to have a reminder that the days of elegance can still inspire great modern perfume. Warszawa is proof that there were curves a plenty during the Golden Age in Poland.