Now that I have been writing about perfume for a while, I have attained some perspective through longevity. A part of that is seeing independent perfumers who have navigated the years while staying true to themselves. I admire anyone who can find a vision while seeing it evolve through the years. In 2005 Olivier Durbano began a collection of perfumes he called “Parfums de Pierres Poemes”, Stone Poem Perfumes. All his perfumes were named after a gemstone which he interpreted as a fragrance. I didn’t discover him until 2007 with his third perfume Black Tourmaline. It was the entry to a brand which has delighted me with every release. 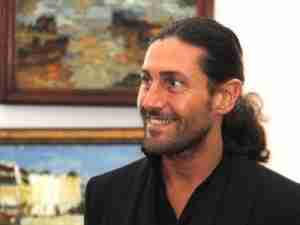 His releases in 2018 and 2019 moved away from the gemstone theme in lieu of spiritual themes. The perfumes remained just as interesting. When I read the press release for Olivier Durbano Aram it seems as if he was merging the spiritual and Pierres Poemes in something larger. He says the fragrance has twin inspirations. One is the full moon, perhaps the biggest stone to write a fragrant poem about. It is also influenced by his first, and only trip to Syria. What he takes from there is the scent of the terroir, the very ground under his feet. A poem about the stone we live upon. Aram is a construct of moon and earth.

Aram opens on a movement of bitter ingredients in harmony. M. Durbano uses grapefruit in its slightly sufurous citric profile. I adore this on its own. It is joined by the biting green of artemisia, and green tea. All of these have an edge to them. In combination it could have become raspy. Somehow, they find an appealing coexistence despite those rough spots. The heart is where the stone resides. Early on it is the dustiness of a Syrian street as incense, myrrh, and olibanum form that. The lunar surface glows through vetiver, benzoin, and cedar. In between both is an ingredient identified as “gum ammoniac”. Based on what I can find it is a sour scented resin. It sits in Aram as a piece of connective tissue to the top accord and the earth and moon faces. From in between all of it comes a rose as if to offer an ameliorating effect. A plea to find beauty wherever you are.

Aram feels like the largest stone poem ever. A grande pierre poeme? It has three accords connected through the rose and gum ammoniac. It is an example of how assured a perfumer M. Durbano has become that even the stones of Earth and Moon still respond to his touch.