The collaboration between Neela Vermeire, of Neela Vermeire Creations, and perfumer Bertrand Duchaufour has been a pretty spectacular success. Over the course of five fragrances they have explored much of Mme Vermeire’s Indian heritage. There is a lot to like about the collection but four of the first five releases definitely are on the deeper, more intense side of the perfumed spectrum. My personal favorite of the line is the one which plays against this, Bombay Bling. When I first wrote about it I described it as a Bollywood production number in a bottle. Bombay Bling wears its infectious spirit on its sleeve. I’ve been wondering when Mme Vermeire and M. Duchaufour might feel like getting a bit more playful again. The sixth release, Pichola, is that return to joy.

The name comes from the lake at the heart of city of Udaipur. There is a lot of talk, in the press release, about reflections on the lake and regal flowers. Reading that I expected to get another deep white floral like most of the rest of the collection. While the imagery is functional it does not describe the way Pichola wears on my skin. There is a moment in the very earliest going where Pichola does seem like it is going to be serious perfume. Just like every Bollywood production you’ve ever seen all of a sudden huge handful of flowers explode through the hard shell and the dance number is on. The transition from tight green opening into explosive transparent white flowers raining down is beautiful. 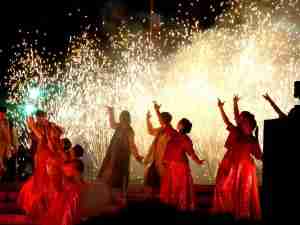 M. Duchaufour creates a hard green barrier consisting of cardamom, juniper, saffron, cinnamon, and, clementine. The early moments are wound as tight as an accountant’s nerves during tax season. This lasts a very short time before a troupe of white flowers come dancing through the stiff upper lip of Pichols forcing it to break into a smile. The winsome star of our show is a fabulous fresh tuberose absolute. Most hear tuberose and expect intensity. Of late there have been a lot of wan pretty tuberoses scrubbed clean and made insipid for the effort. The tuberose M. Duchaufour employs here has an incredible expansive quality without becoming overwhelming. You are never unaware of its presence but the other florals like orange blossom, ylang-ylang, and jasmine have plenty of space to dance happily alongside. It is in this phase of floral fandango where Pichola settles for hours. When it finally starts to move on it is time to rest from our exertions on a sweet woody bed of benzoin and sandalwood.

Pichola has 8-10 hour longevity and below average sillage.

I am so happy to see Mme Vermeire return to a lighter style of construction. There is so much positive emotion on display it is infectious. I was uplifted each day I wore Pichola. Yes I want to smell good but some days I want to also have a barely suppressed laugh to go along with that, Pichola does that for me.

Disclosure: This review was based on a sample provided by Neela Vermeire Creations.