If you’ve been interested in the boats that ride on the ocean you’ve probably visited a historical exhibit containing a large wooden sailing ship. One of the things which always struck me when I would be on one of those ships was the way it smelled below deck. Once you got down there the scent profile would shift from airy sea spray to wood keeping out the ocean. It was a more claustrophobic effect. 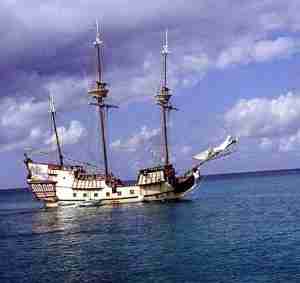 There was a roadside attraction “authentic pirate ship” close to where I grew up in South Florida. While I am pretty sure that it wasn’t ever a pirate ship the staff sold it. When you went below decks there it was plunder over comfort. They told us the pirate’s life was sleeping in a hammock swinging over what you stole. I spent time imagining snoozing on my hammock above the spices we just stole from that merchant ship. My sample of Nautica Midnight Voyage gave me a connection to that dream.

Nautica is a brand which represents the beach life. That extends to their fragrances which are all aquatics of one kind or another. Midnight Voyage doesn’t break away from that. What is slightly different is it is that below deck juxtaposition I mentioned as Midnight Voyage is more woods than ocean. This is what perfumer Alexis Grugeon produces.

It opens with baie rose given some support with pineapple and bergamot. This is much more that fresh herbal-ness baie rose imparts. The fruit is here to keep it tilted to that side of its nature. There is a compact sea spray accord as we head to our hammock. Below us are sacks of spices. The chill of fresh mint and the cool swoosh of cardamom provide a reminder of what we took. This is a very pleasant top accord. It gives way to a deeper woodiness through the synthetic Woodleather and Ambrox. The former is an oud equivalent. In Midnight Voyage it reminded me of the treated timbers of the hull of the ship. Ambrox does its typical dry woody thing.

Midnight Voyage is another well executed aquatic from Nautica. They could do these in their sleep by now. I am appreciative that they seem to be trying a little harder. It helps this imaginary pirate still think of being on the high seas at my age.

Disclosure: This review is based on a sample provided by Nautica.