There was a moment in time where I thought the Marc Jacobs fragrance collection was trying to do something different in the mainstream sector of perfume. 2007’s Daisy, 2009’s Lola, and 2010’s Bang were each an attempt to lure in a different perfume buyer with tiny nods to a niche aesthetic. I admired the ingenuity to see if there was a consumer out there for this style of mass-market perfume. Somewhere along the line this kind of thinking evaporated as the brand became a flanker factory with numerous Daisy, Lola, and Splash entries cluttering things up. All of these were so painfully pedestrian that even when they made the odd foray into something different like 2012’s Dot it just felt half-hearted. Over the last couple of months it looks like Marc Jacobs has decided to give it another try.

I generally liked the summer release Mod Noir although the name is a bit of false advertising. Bottom line was it wasn’t another flanker and it was definitely in the upper percentiles in the department store category. About a week after I wrote that review I received a sample of the new fall release Decadence. Because I had liked Mod Noir and the timing was right I tried Decadence right away. My first impression was this was very different than any of the other tent pole fragrances for the brand. Mr. Jacobs along with Ann Gottlieb were the creative team working with perfumer Annie Buzantian on Decadence. What they have created is the strongest floral in the line as they move away from the fruity floral and run headlong into floriental territory. 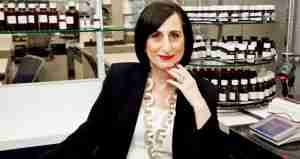 Mme Buzantian adds the niche like-flourishes in the top and the base. The top notes are iris, plum, and saffron. The saffron exerts enough of a presence to keep the opening from being a boring fruity floral accord. There is enough familiarity there for someone who is a fan of previous Marc Jacobs to find a safe place to start their Decadence experience. The triple whammy of orris, rose, and jasmine in the heart is meant to sweep them off their feet in a swoosh of heavy hitter florals. So often this kind of power is carried by a bunch of white florals. I like the change by Mme Buzantian as the orris bumps up against a spicy rose and slightly indolic jasmine. It doesn’t go as far as a typical niche release but it goes a lot further than most of the other bottles on the perfume counter. This is the tricky part to give a consumer something different without alienating them. From my perspective I think it is a brave choice which could go either way. The base is a very green mixture of papyrus and vetiver matched with amber. It forms a verdant Oriental accord for the florals to rest upon.

Decadence has 10-12 hour longevity and way above average sillage. A lighter application than other perfumes is probably necessary for best results.

It looks like Mr. Jacobs has not given up on his desire to try something different as with Decadence he is really taking a bold step outside of the previous oeuvre of the brand. He is doing a smart thing and putting this in a spectacular looking bottle which looks like a clutch purse complete with tassel. The bottle will drive some sales all on its own. I think many of those and others who give Decadence a chance will be surprised at the new direction for Marc Jacobs. I hope they like it because I would like to see more of this from the brand. I know they have my attention, again.

Disclosure: This review was based on a sample provided by Coty.