One of the things about the independent perfumers is they can follow their vision. They can interpret a favorite theme in multiple ways. As an observer I can sometimes see a theme that isn’t actually there. I can impose my perspective using scant clues. Which is what I have done with perfumer Lesli Wood.

Almost five years ago I was introduced to her through the perfume La Curie Incendo. It was a mystical inverted pyramid style of perfume. I took a line from the card which accompanied the sample which had “Fire walk with me” on it. That comes from the television series Twin Peaks. Readers of my Sunday column know how much I like it. As I wrote about that I assumed Ms. Wood shared my enjoyment of the show. At the end of the review I said I was going to be wearing it on the first night Twin Peaks returned a few months later. I did which only reinforced my thinking. 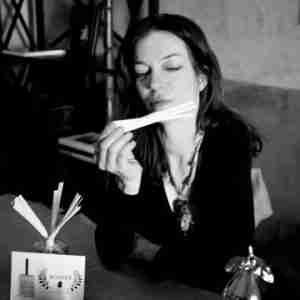 Just after the New Year Ms. Wood offered me an opportunity to catch up with her perfumery over the last five years. She sent me a sample set of six new perfumes. I was once again taken back to the thought there is a lot of Twin Peaks in the way she makes perfume. She adores the smoke which hangs in the trees of the Pacific Northwest which shows up consistently. She also can go in a fascinating odd tangent as she does with Odyssey. This is the smell of molded vinyl. She is not interested in conforming to they typical norms. The one from this set of six which really connected with me is La Curie Geist.

Ms. Wood’s use of smoky materials is remarkable. Many perfumers get the balance all wrong. In everything I’ve tried from her she knows how to achieve a balance by using just the right quantities. In Geist, the source of the smoke comes from a leather accord. What surrounds it is a host of sharply scented interrogators.

Before the leather arrives, Geist begins with black hemlock and pine. The terpenes of the pine cut across the acerbic vegetal scent of the hemlock. They act as crossed sabers atop a field of newly tanned leather. The pungency of an ink accord inscribes that milieu. She is using an accord which reminds me strongly of those old cartridge fountain pens I had as a child. The nib bites into the leather as it writes. The base is a fantastic grounding accord of geosmin reviving the scent of moist soil. As if this was a found object deep in the mysterious woods.

If you are looking for a new perfume experience and smokiness doesn’t scare you off La Curie is a brand you should consider. I am going to make much more of an effort to stay up to date with her work from now on. It takes a sharp mind to make a perfume consisting of sharp objects.

Disclosure: This review is based on samples provided by La Curie.