I continue to be enchanted with Creative Stephenr Dirkes as he adds to the story being told with perfume for his Euphorium Brooklyn brand. In this version of a perfumed penny dreadful chapter six entitled 100 Tweeds has just been released.

Mr. Dirkes has been telling the fanciful tale of the men who founded the Euphorium Bile Works in Brooklyn circa 1860. The three men; Etienne Chevreuil, Rudolph Komodo and Christian Rosenkreuz are our protagonists. The first four perfumes released were stories of them together. Now the next three are clearly going to be the “backstory” of each of the Bile Works boys. 100 Tweeds is the story of how Hr. Rosenkreuz needed to leave his native Bavaria and find a new life in the New World.

The story is told in much more enjoyable detail on the website but here is the Cliff’s Notes version. While working in his study on the edge of the Schwarzwald he sends his only daughter out to walk in the forest. He insists she wears her tweed hunting jacket. Not knowing tweed was a natural attractant for bears the obvious tragedy was set into motion. After the death of his daughter Hr. Rosenkreuz was obsessed with making a tincture of tweed. Not just one tweed but all tweeds. 100 Tweeds is that story. 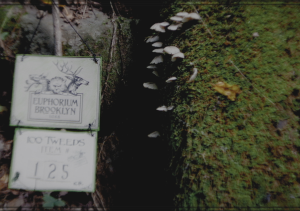 100 Tweeds is the most challenging of the six Euphorium Brooklyn releases to date. Mr. Dirkes really does capture the smell of a cedar chest with 100 versions of tweed jackets hanging within. For the first time a Euphorium Brooklyn release is tilted much more towards an avant-garde edge. The previous five had their moments but 100 Tweeds is unusual from beginning to end.

The early moments of 100 Tweeds is that musty sort of closet smell overcrowded with woolens. This accord hangs very heavily over the first half an hour or so. I’ve never had a cedar lined closet full of clothes but this accord is much of what I imagine it would smell like. The heart is an evocation of the Bavarian countryside in the Schwarzwald. Calamus is chosen as the nucleus of the heart and it is surrounded by all sorts of herbal and green effects. Hemlock, ivy, celery seed, and parsley seed create a very pungent heart note which again will push many who try this right to the edge of their tolerances. The base starts off slightly contemplative with a honeyed tobacco which is trampled in short order by cypriol, cade and a peat accord. Here is the heath brought to life in all of its peaty glory.

100 Tweeds has 10-12 hour longevity and average sillage. This is also an alcohol formulation as was Suedois and Petales.

100 Tweeds is going to be a chapter to get through that I won’t be eager to return to. Mr. Dirkes makes 100 Tweeds challenging at every turn. For a project such as Euphorium Brooklyn it is a little surprising it took six releases to finally fully embrace the odd perfume notes and fold them into the story. If you’ve been following along 100 Tweeds should be experienced just so you don’t skip Hr. Rosenkreuz’s chapter. Under no circumstances should 100 Tweeds be the one used to introduce the line as it stands outside on its own. Waiting to see if the bear is on its way.