Very likely as an infant my first fragrance experience was the sprinkling of Florida Water on my crib linens. As a toddler I vividly remember the orange and lavender concoction as the scent of my bedroom. My mother liberally used it to freshen up the room and something to use after a bath. As a result I have always loved lavender perfumes. What I have always enjoyed are the many different varieties of lavender I have come across as they cover a range from more green and herbal at one extreme to sweet floral on the other. Depending on the place in the world it is grown and the technique used to extract the essence there are probably myriad gradations in between the two versions I described above. If you have a good lavender perfume I am going to be interested.

Which brings me to Pitti Fragranze 2015. I have lost patience with these new brands which land with too many releases. When I hear some ridiculous number of entries I am just going to give up before trying because smelling a massive collection is just bound to be mainly disappointing. The nagging worry in the back of my head is always but what if in the midst of all that average perfume there is something really good? This was what happened on Day 1 at Pitti when I stopped at the Essenzialmente Laura stand and heard there were 39 new releases by perfumer Laura Bosetti Tonatto. I couldn’t move away fast enough. On Day 2 while having lunch with Michael Edwards he asked me if I had stopped by the stand. I said 39 new perfumes! I don’t have the time to try them all. Mr. Edwards had tried them all and he also knows of my enjoyment of lavender. He suggested I go try the three lavender ones. That I thought I could handle and so on Day 3 I came back to try 3 not 39. 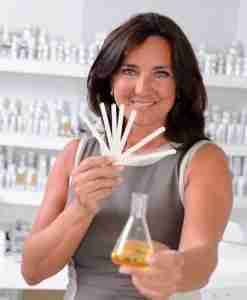 The three lavender perfumes in the Essenzialmente Laura collection are Lavambra, La Lavanda di Leonardo, and Lavanda. Lavambra as the portmanteau name portends is lavender and amber. La Lavanda di Leonardo is lavender and rose. These are both excellent perfumes which are balanced quite nicely between the two main notes. At the end of the day though it was Lavanda which captured most of my attention.

Sig.ra Tonatto keeps it simple as she takes lavender from five different sources. Two from France, one from Morocco, one from England, and one from Torino. The five different versions chosen run the gamut from herbal to floral. Together Sig.ra Tonatto has created a grand lavender accord like no other. On the days I wore this it was like a kaleidoscope which as I turned it a new shade of lavender would take precedence. To balance all five lavenders so that I can detect each of them plus to form the uber accord is not easy. Lavanda is simple in effect but complex in architecture.

The lavenders were so good I did delve a little deeper into the line and among the others I tried the vetiver centric VI was also pretty good. If you love lavender all three of the Essenzialmente Laura lavenders are worth the effort to seek out and try. If you are a lavender fanatic Lavanda is a must try for the most complete lavender accord you will find in a perfume.

Disclosure: This review was based on a sample provided by Essenzialmente Laura at Pitti Fragranze 2015.