It was a little over seven years ago, that I was asked to join this new perfume blog called CaFleureBon. Conceived and overseen by Michelyn Camen it began the process of my becoming a better writer and observer on fragrance. In those early days, there were several large projects within the independent perfume community. Where a specific subject or inspiration was given to a set of perfumers and a chosen group of blogs would write about those fragrances. They were some of my favorite pieces to write. The perfumers would all interpret the project in very different ways often leading to very personal expressions of scent. Recently these projects have seemed to fade away until Ms. Camen decided to give it a try again in honor of the seventh anniversary of CaFleureBon.

The name is Project Talisman and the link to the overall project can be found here over at CaFleureBon. Boiled down it is the idea of different “eau de protection” representing items used to keep the bad spirits at bay. As always Ms. Camen has assembled a group of some of the brightest lights in the independent perfume community. While we were having our not regular enough phone call and she was telling me about this she offered me the opportunity to have some of them sent to me. I eagerly said yes and over the next few weeks I will be reviewing one of them every week. First up is En Voyage Perfumes Figa by perfumer Shelley Waddington. 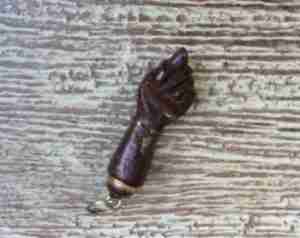 I first encountered the small fist shaped charm with the thumb inserted between the index and middle fingers on a necklace worn by the most exotic woman I knew; when I was seven. Senhora Azevedo had come to Miami from Sao Paolo, Brazil. There was a rumor among the older kids that she was a witch. As she would sit in her front yard puffing on a cigarillo I didn’t think that was true. One day the chain on my bicycle came off the ring right in front of her. As I flipped my bike over to restore the chain to the gears she walked towards me. I had two instincts warring within me. One was to get the chain back on the ring as quick as I could and ride like the wind. The other equally strong desire was to face up to the cigarillo puffing apparition moving towards me. The second choice was what won out. From that day forward I would stop on my bike and have a few words with Senhora Azevedo on my daily tours of the neighborhood. Even on that first day I noticed the hardwood charm in the shape of a fist hanging from her neck on a strip of leather. Eventually I asked what it was. She would tell me it was a Figa. The way she pronounced it sounded more like Feek-ah. She told me it was there to protect her from the evil in the world. 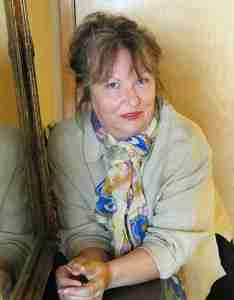 Ms. Waddington who has been on a creative roll recently decided to take on the Figa as her part of the Project Talisman effort. In her text accompanying the sample she says, “I chose this talisman because it conveys attitude. I strongly believe in peace through strength.” How this translates to perfume is as a clenched fist of beautifully poised floral notes with a resinous thumb thrust through the fingers.

Using geranium as the palm of her fist she slowly folds down fingers of bergamot, rose, jasmine, and violet. The early going is the clenched strength of these notes as they coalesce into a powerful floral accord. The geranium gives a green underpinning which also represents the space where the thumb composed of patchouli, labdanum and amyris thrusts itself through the fingers. This mostly resinous accord uses that subtle green as the launching pad to cleave the florals. Once the olfactory charm is complete a bit of vanilla and sandalwood ameliorate the force a tiny bit.

Figa was the first of the Project Talisman perfumes to arrive in my mailbox. It was a perfect way to ease in to the project. It also encapsulates what I enjoy about these perfumes which come from these efforts. Figa is a continuation of the excellent work Ms. Waddington has been doing yet it feels more personal. I can almost imagine Senhora Azevedo’s spirit nodding in approval.

Disclosure: This review is based on a sample provided by En Voyage Perfumes.

To read the review of Figa done over on CaFleureBon by The Nosey Artist follow this link.