As older brands find their way back in to the marketplace it has been a bit of a mixed bag so far. One brand which I would have labeled as not living up to its heritage was Courreges. This was the fashion brand started by Andre Courreges and he was responsible for the go-go boot as well as one of the designers who made the first mini skirts. These were part and parcel of his futuristic aesthetic which would flourish especially in the 1970’s when M. Courreges found his muse and his model in Grace Jones. Throughout the 1970’s he dressed the singer for many of her magazine covers. Courreges released a couple of fragrances during this time; Courreges Homme and Courreges Amerique, The brand would make another go at perfume in the 1990’s but by 2001 had given up again. M. Courreges would sell the brand in 2011 and the new owners wanted to give fragrance a third try. There have been a total of seven releases since 2012 and the first six played it safe with well-known genres done in workmanlike style. Nothing could be further from the name on the bottle. Late last year the seventh perfume was released; Courreges Hyperbole and this felt more like what a Courreges inspired perfume should smell like. 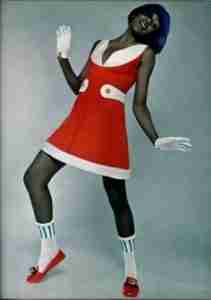 Grace Jones in Courreges circa 1969

Hyperbole reached back to have perfumers Jean Jacques and Antoine Lie be inspired by Ms. Jones and a 70’s collection of sportswear of the same name. What came out of that was a perfume that was going to take traditional masculine notes and make them feminine. As one who sees perfume as genderless I can’t speak to the success of the gender bending they were after. What they have produced is a perfume which is a sweet tobacco with real charms. 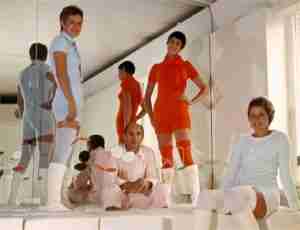 Andre Courreges (seated) surrounded by his Hyperbole Collection circa 1974

Hyperbole opens with a snappy blast of white pepper balanced against bergamot. The white pepper is more stripped down than its full-strength cousin black pepper. That makes it a nice companion for the bergamot. The tobacco source used in Hyperbole is tobacco flower. This is where I am guessing the perfumers are trying to feminize the tobacco. The problem is they use patchouli to take the flower into that more typical deeply narcotic place you find tobacco in perfume. Vanilla provides a complementary sweetness to wrap up the tobacco and push back against the patchouli.

For the first time since Courreges has started producing perfume again Hyperbole feels like something which fits M. Courreges style. There is a 70’s feel to all of it. I can see Ms. Jones wearing Hyperbole with a cigarette drooping from her magenta colored lips.

Disclosure: This review was based on a sample provide by Air France.