One of the best collections of exclusive perfumes is Cartier Les Heures de Parfum. In-house perfumer Mathilde Laurent has been filling in her thirteen-hour clock since 2009 and it contains some of the best perfumes of Mme Laurent’s career. We are only lacking V & IX to complete the series. Last year we got an indication that the spirit of a very luxurious artisitic collection would continue when the numbers were done. Those three releases were called Les Heures Voayageuses and were oud-focused as you can tell by their names: Oud & Rose, Oud & Musc, and Oud & Oud. These were well-made versions of these classic oud pairings but they all felt like they were Mme Laurent working on the classics before putting her own spin on it. (There is a great little interview by Mme Laurent on Persolaise where she mentions working on these first three) I was more interested in what newer companions Mme Laurent might think would be good with oud. The new release Oud Radieux answers that question.

In the interview linked above Mme Laurent is quoted as saying, “I find that going to Arabian countries with our perfumery is like selling French Coca-Cola in New York. But at the end, as I really love oud, I decided I wanted to work on it.” I understand her point but my favorite oud perfumes have come from Western perfumers who have decided to make an oud perfume which is meant to be French Coca-Cola instead of something sold in the Middle East. The first three did not reach that level for me. Oud Radieux does. 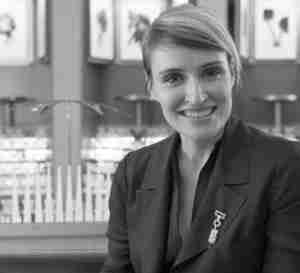 When I read that quote I am much more interested in Mme Laurent truly embracing an oud that would be something different. I think Oud Radieux shows right from the start her desire to elucidate the nature of real oud with the same minimalist structure as in the first three. Here she creates something modern.

I tend to inwardly groan when I read press copy which mentions using energizing ginger as a top note. There are very few times I find it energizing. Mostly because it is way too often muddled up with other citrus or spice notes. In Oud Radieux Mme Laurent provides as distinct a ginger note as I’ve encountered. It has a sharply spicy rootiness which smells like the way I taste the pickled ginger which accompanies my sashimi. Paired with this is Szechuan pepper. Ever since smelling this at Pitti Fragranze in 2014 it has shown up in some of the most interesting places in the new perfumes of 2015. It is an excellent choice to go with ginger as it adds a shimmering spicy heat to contrast the more savory spiciness of the ginger. The other facet is this sort of musty quality it has underneath. Mme Laurent uses that as the connection to the oud. When you encounter real oud it also has a similar mustiness to it which is much more pronounced. This pulls the ginger along with it and the moment when they mix with the oud is fascinating. Real oud also carries what some describe as a medicinal or Band-Aid smell. The ginger and Szechuan pepper turn that into an accord which takes those less desirable elements and finds a place of zesty beauty within it. From here the oud really takes over. I am not sure if it is the oud Mme Laurent is using or if she accentuates it with some other animalic notes but it really gets a little more animalic than I usually encounter with real oud. It is definitely the most animalic of these four perfumes even more so than Oud & Oud. It feels like a natural progression down to something which carries a bit of ferocity in the end.

There has not been any of the numbered entries of the Les Heures de Parfum which have used oud. If there was going to be one Oud Radieux would be among the best within that collection. I have really enjoyed Mme Laurent’s version of French Coca-Cola and hope if there are more to come they are in the style of Oud Radieux. Maybe a macaron next time?

Disclosure: This review was based on a sample provided by Saks Fifth Avenue.