When we would spend time in the Florida Keys one of my favorite activities was to go fishing for bonefish. To do this we would take mt 17-foot open fisherman boat out to a region called “The Flats”. You could only boat right up to the edge. This was a shallow expanse of water where the sand was a few feet below the waterline. I would pull the engine up and use a pole to maneuver deeper inside. Because it was so shallow you could see the bonefish through the water. The sport was to take barbless hooks and lower weight test line to really use your skill to bring the fish to the boat. We would catch and release. The fish were inedible, the name speaks the truth on that score. This was completely a chess match between human and fish. On these days I would stand in the bow shirtless in a pair of shorts and boat shoes locked in battle. By the end of the day my brown skin would be encrusted in the evaporated sea spray. Carthusia A’mmare is the scent of those excursions. 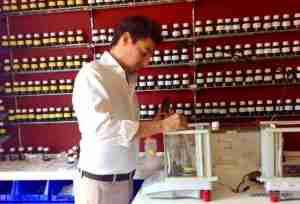 Carthusia is one of those small brands without the widest distribution. I have always found them worth the effort to seek them out. Since 2017 they have used perfumer Luca Maffei as their exclusive composer. Sig. Maffei has done a great job at re-creating the Mediterranean aesthetic which has been part of the brand’s roots back in 1948. With A’mmare he takes us offshore for a day on a boat.

There is a deeper version of the classic sea spray accord used by lots of aquatic scents. It is called by a lot of different names. In this case Sig. Maffei calls it “salt crystal”. This is not the freshness of the briny mist, but the solid salinity of what evaporation leaves behind. It is a little sharper in scent. He uses rosemary and mint to add back that summery expanse of blue sky overhead. A typical aquatic water accord lets us know we are in a boat. The final stages are creating a sun burnished skin accord using musk and patchouli. This is accompanied by the sun-bleached woods of guaiac and cedar.

After a day on the flats I always enjoyed the scent of the salt on my warm skin. A’Mmare recreates that memorably.