Brands, if they stick around long enough, will ebb and flow. This is a natural effect of shifting priorities, changes in creative direction, or just plain laziness followed by industriousness. Bvlgari has done this and after a long fallow period it seems like the fortunes of this brand are on an upswing. It started with Eau Parfumee au The Bleu. I’ve recently received samples of the three new additions to the La Gemme collection and these are significant improvements over the first set of La Gemme releases. The last sure sign of a change in the wind direction is the launch of a new mass-market release. That attempt is Goldea.

One of the reasons for this upward trend is Bvlgari has been using two perfumers fairly exclusively over the last 18 months; Daniela Andrier and Alberto Morillas. I think when a couple of perfumers can help define the brand aesthetic for a brand like Bvlgari it can be an asset. When I learned M. Morillas was the perfumer behind Goldea I was particularly interested beacuase of this line in the press release, “this patina are brought by the very modern and nearly tangible musks”. There is no perfumer who uses the various synthetic musks better than M. Morillas. His perfumes which feature musk are my own personal reference library on what can be achieved with them. It sounded like Goldea had some new things to show me. 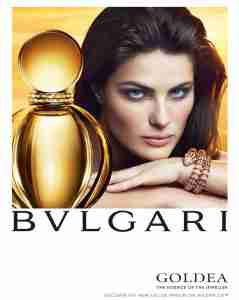 Goldea is based on Cleopatra. Despite the PR imagery using Isabeli Fontana doing her best to channel her inner Egyptian queen it is the bottle next to her that gives the best indication what Goldea smells like. A light polished golden orb. The press materials spend a lot of time talking about gold and that is what Goldea does resemble. It has the feel of well-polished gold held up to sunlight. The musks plus one very inspired choice of floral note make this a golden glowing musky floral.

Goldea opens with what M. Morillas describes as a “crystal musk”. This is one of those musks that almost has an ozonic aspect to it evoking a sea breeze quality. It is sharp and clear as a crystal. To soften that M. Morillas uses a little bit of orange blossom and raspberry. This is not as interesting as the rest of the development as it is pretty standard fruity floral top accord territory. The heart is where things become very interesting as jasmine arrives wrapped in a furry musk. This is a mass-market perfume so when I say furry musk it isn’t enough to scare the customers but it almost replaces the reduced indolic nature of the jasmine used. What turns the heart of Goldea into a glowing globe is a beautifully chosen ylang-ylang. A perfumer has at their disposal almost every version of ylang-ylang and most often they go for a version with a specific effect. I prefer the full version which has an almost fleshy floralcy. M. Morillas doesn’t push that far but he is using a fuller version of ylang-ylang than you will normally run into in the department store. The ylang-ylang here is much more tropical in its effect and it is also matched with another animalic trending musk. Together the two musks and the two florals form a fantastic heart accord. The base is a couple of the cozier musks snuggling up with patchouli with one final surprise in the green veil of papyrus adding in a sheer woody aspect. It glows like a sunset.

Goldea has 18-24 hour longevity due to the musks and average sillage.

Goldea is a bold step away from the releases of the past few years. I am pleased to see Bvlgari back to taking a few chances instead of releasing another set of flankers. At least for the moment Bvlgari is riding high and Goldea is one of the reasons.

Disclosure: This review was based on a sample I received with purchase.