The last couple of years have seen the rise of a new style of independent perfumer; the distiller. It stands out because these are unique small-batch ingredients. As an analogy I think of some of the more esoteric craft beers which are brewed in limited quantity due to a special ingredient. These kinds of products provide a thrill for the aficionado because of the rarity and novelty. This holds particularly true for the distillers. These new materials capture the attention but there are some drawbacks.

As I really began to try some of these types or perfume late in 2017 and into 2018 it was the materials which drew me in. Exquisite attars and co-distillates were like finding undiscovered gems. As it has always been when I discover something new it was the tree which enthralled while I forgot to look for the forest. These styles of fragrance are stuffed to the gills with material after material; literally dozens of ingredients. They are not so much perfumes as exercises in sensory overload. Eighteen months after having experienced a few of these I am looking for more than just a wall of scent. I want something a bit more nuanced. I’m not sure if it was by design, or not, but Bortnikoff L’Heure Exquise offered me a moment or two of something sublime instead of scented sledgehammer. 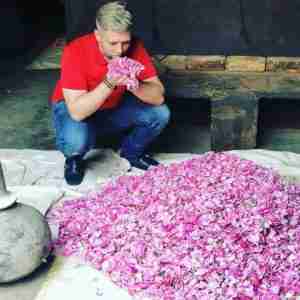 Dmitry Bortnikoff is the distiller behind his eponymous brand. On his website he says he is both architect and distiller. He learned the art of distillation while in Thailand. That experience has allowed Mr. Bortnikoff to source some exquisite oils. He released three perfumes early in 2018 all of them had beautiful facets to latch on to but they were overcrowded with distracting ingredients. It made it seem like I was hacking through a jungle of perfumed vines on a frustrating journey. One of the things I’ve found with the distillers is they also tend to improve as they release each of their waves of limited editions.

When I received the second set of three releases over the Holidays I tried Oud Maximus first and encountered what I didn’t care for in the first three. Things improved when I tried Vetiver Nocturne. There the precious distillate of rus khus was given some room to breathe. This time the trip through the congestion was worth it. When I got to L’Heure Exquise I found a fragrance where Mr. Bornikoff found a genre of perfume where the bombast is an asset.

L’Heure Exquise is a weighty floral gourmand which starts softly as cardamom and neroli add a gentle spiced citrus breeze. A high cacao content chocolate appears carrying a bitter bite. Mr. Bortnikoff chooses clove as its companion. For a moment L’Heure Exquise breathes in as the citrus, spices, and cocoa form the most authentic accord Mr. Bortnikoff has produced. What comes next is a lovely transition involving camphor and cypriol as they provide some staging for the floral notes of jasmine and champaca to float on a flow of myrrh. This is where things begin to verge on the congestion I have previously found distracting. Just as I begin to think that; the base accord of oud, balsam, and styrax manage to cut through all of that bringing back the cocoa to interact with the woods.

There is a part of me that wishes a half-dozen of my favorite creative perfumers could go spend six months with Mr. Bortnikoff. Returning with three or four of his distillations and see what kind of perfume they could make. I think that is as likely as finding unicorns on my front lawn tonight.

What is not so rare is Mr. Bortnikoff will continue to distill beautiful raw materials and every once in a while, it will find the right balance as in L’Heure Exquise.

Disclosure: this review is based on samples I purchased.