Italy has become one of the predominant perfume countries because of the originality which many of the releases display. Bois 1920 was one of the original Italian brands to embrace the creativity which seems endemic to any perfume from the country now. Bois 1920 Cannabis Fruttata is what I mean when I say that.

Enzo Galardi resurrected his grandfather’s perfume brand in 2005. For twelve years there was a consistent output of perfumes which took chances. Sometimes they worked, sometimes they didn’t. I admire a fragrance brand that willingly takes this route. Although I wonder how it affects the bottom line. It had been since 2017 which saw the last new release. It made me wonder if the attitude had caught up to them. Now under new ownership would they stay as adventurous? My answer came in seven new releases this year. All of which upheld what had come before. 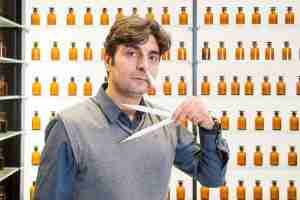 Part of those releases were the two perfumes in the Cananbis collection. Both were composed by perfumer Cristian Calabro. One fittingly named Cannabis is a straight soliflore style fragrance which smells like sticky green buds of cannabis with a dose of patchouli to boot. It is a Summer of Love flashback in a perfume. I liked it fine, but it was the other one, Cannabis Fruttata, which took the cannabis accord Sig. Calabro created for Cannabis and uses it in a modern fragrance.

Cannabis Fruttata opens with what I believe to be a sly wink. In the 60’s people were regularly ripped off when an unscrupulous dealer would sell a bag of oregano as cannabis. Sig. Calabro uses the sweet herbal quality of oregano along with rosemary and fig leaves to create a slightly milky herbal top accord. It was hard not to smile when the real thing replaced the oregano as the cannabis accord takes hold. Sig. Calabro has constructed a slightly bitter green accord which captures the real thing beautifully. He cleverly brackets it in the heart accord with the green floral of lily and the sweetness of blueberry. The blueberry is an inspired choice as it captures the resinous nature of a fresh bud of cannabis with its sweetness. This is a great use of the cannabis as part of something greater. The base goes woody with ambrox and cedar leavened with a bit of patchouli.

Cannabis Fruttata reminds me why I enjoy this brand so much. Sig. Calabro makes a contemporary interpretation of cannabis in perfume by rolling his own.