As I’ve come to know the perfumes of independent perfumer Russian Adam through his Areej Le Dore brand I have consigned them to my “wall of scent” category. What I mean by that is they are solid constructs of ingredients only an independent distiller could source. These kinds of materials have nuances and grace notes not experienced in more industrial isolations. It is what makes the Areej Le Dore perfumes stand apart. Because of that, balance is sometimes less apparent because the volume is so turned up. It is like listening to punk rock turned up to maximum volume; the pleasure is all in the intensity not necessarily the precision. In the group of fragrances, I put in this category there is always an anomaly where the perfumer chooses to show me there is an ability to play at a lower volume, if not necessarily something I’d call soft, while also displaying a subtler hand in putting together things. That is how I view Areej Le Dore Walimah Parfum.

Before we go any further this is a review of the Parfum version of Walimah. Russian Adam released an attar version of Walimah as well. That is so different from the Parfum I am going to give it its own review. This is also where I’ll mention that this is a review based on the version released in February 2018. I also need to thank Kafkaesque for all the information on Walimah contained below. 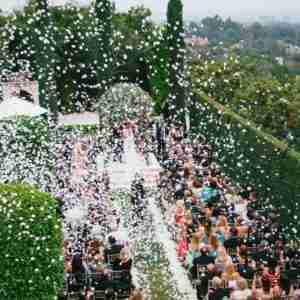 Walimah was inspired by Russian Adam’s marriage at the end of 2017. He describes it as, “the beautiful union of two souls from different corners of the globe”. Walimah is an evocation of the Russian groom and the Indonesian bride as there is a suite of ingredients which represent each. For the bride it is tropical flowers. For the groom it is genuine musk, rare oud, and vetiver. What captured me throughout the development of Walimah was the interlacing of complementary notes in celebration of this union.

It opens with the bride swathed in a silky dress of magnolia. The magnolia used here has a creamy floral nature underscored with its woody nuance. The groom is dressed in an authentic musk tuxedo. The depth of the musk provides a solid platform for the magnolia to drape itself upon. The ceremony complete, the first kiss is of white flowers and oud.  Tuberose and gardenia form the bouquet. The oud is described as coming from “incense-grade wood” from Bengal. As the magnolia and musk settle into the floral indoles and oud it forms an exquisite accord which captures this ceremony. Russian Adam uses a special Champaca distillation which rains down upon the happy couple. It has an interesting tempering effect to the white flowers. The same is achieved with a ribbon of tobacco which tames the musk and oud. Just as many of the Areej Le Dore begin to ramp up in intensity Walimah finds a plateau where it remains until the end. Through the final phase there are more ribbons to tie onto the heart accord. Cocoa passes through accentuating the chocolate vibe of the oud. Saffron adds a happy glow to the champaca. Cinnamon provides spicy contrast to the musk. Once this all moves along to the base it is a rounded vetiver accord which uses labdanum and Peru balsam to make the vetiver a smooth closing effect.

I like my perfume “loud” and when I do the Areej Le Dore perfumes are where I often look for that. Walimah will not be on this list because it is a union of dualities made whole with a kiss.