Back in the 1970’s Coca Cola came up with a slogan “Coke, it’s the real thing.” I think of it a lot in reference to perfumery. Especially with synthetic alternatives for raw materials like musk, oud, or ambergris. Perfumers can be magicians in forming an accord which performs the illusion of the real thing but once you experience it you always know where the gaps are. Because of that I obtained real samples of musk, oud, and ambergris. When it came to musk and ambergris I thought you have one kind you’ve got them all. At least in the case of ambergris I should have considered my oud experience. My little precious case of ouds covers different geographies and years of aging. My first clue my education in real ambergris was lacking came courtesy of Areej Le Dore Atlantic Ambergris. 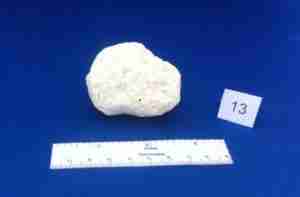 I have a tiny pea shaped amount of solid ambergris which sits in a sealed vial like a black stinky pearl. When I open it for a sniff it is briny with a pronounced funk to it. I also own an ambergris attar from Amouage and it is what I expect a tincture of that odiferous pearl to produce. I thought my knowledge base was complete. When I read the review of Atlantic Ambergris on Kafkaesque there was a primer on the spectrum of ambergris to introduce the review. Kafkaesque turned to Pat Lillis of Celtic Ambergris to provide the explanation for what causes the different scent profile for any chunk of ambergris. If you’re interested I urge you to go read it. The short form is the longer a chunk spends floating in the ocean the more bleached it gets providing a softer scent profile while the chunks that spend more time on shore in the sand get blacker, and funkier. Russian Adam obtained a quantity of white ambergris, from Mr. Lillis, as the keynote of Atlantic Ambergris.

Russian Adam describes the scent profile of the white ambergris in Atlantic Ambergris this way, “It’s aroma is pristine, fluffy, silky, slightly powdery, sweet and earthy, with a bottomless oceanic depth that is truly unique.” I agree with that statement entirely but what really struck me was the last part of it. Growing up in S, Florida there were days where I was out on the ocean water skiing or just leaning over the side of the boat as it headed home at speed. There was a smell of the ocean that went beyond sea spray to something with more weight to it along with a briny depth. As the white ambergris rises I was vividly reminded of this smell.

Atlantic Ambergris is a Russian Adam perfume which means it is full of other interesting notes besides the white ambergris. He chooses to take his unique keynote and float it upon a sea of spices; cardamom, clove, and nutmeg. This is a powerful wave of spices which are meant as contrast to the deep ocean quality of the ambergris. I am a fan of all three of these spices and I am given full servings of all of them. As the chunk of ambergris approaches the shoreline the wind brings the smell of the pines and the tropical flowers of jasmine and ylang ylang. This all transitions into a base accord which I think is funnily enough Russian Adam’s concept of an oud accord. From a perfumer who has consistently used exquisitely sourced ouds it seems like he didn’t want to step on the beauty of the ambergris. This gives an oud-like foundation which because it is an accord he can tune it to exactly the desired effect.

If you’ve never smelled the real thing, when it comes to ambergris, Atlantic Ambergris provides an opportunity. I know that there is a wide world of ambergris to explore now but it will be hard to be better than Atlantic Ambergris.