One of the great things about Facebook is the anticipation it builds in me for upcoming perfumes from many of my favorite independent perfumers. Early this month Mandy Aftel posted a picture with the caption “Working at my organ on a new chypre perfume!” In a response to one of the comments she promised, “it has all the “real” stuff in it.” It would be barely a week later when Ms. Aftel contacted me to let me know a sample of her new solid perfume for Aftelier Perfumes, Bergamoss, was on its way. 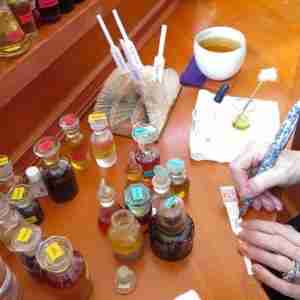 Picture from Mandy Aftel's Facebook page of her working on Bergamoss

Ms. Aftel often releases her perfumes as solids versus liquid applications. The biggest difference I notice is how wearing a solid perfume might be the most intimate experience one can have in perfume. The act of taking a finger and dipping it into a pot and choosing where to apply it only adds to that feeling.

Bergamoss is indeed a chypre with all of the “real” stuff. It is also a chypre made personal which is a side effect of it being produced in a solid form. By making it in this form Ms. Aftel takes something well-known and transforms it into something more transparent. Because it has all of the appropriate components it makes one lean in looking for more. Bergamoss makes me take what it is willing to give. Once I stopped chasing and actually accepted the level of engagement it became much more compelling than it was on first sniff. By the time I had worn this a couple more times it was all about the compulsion to bring it closer. 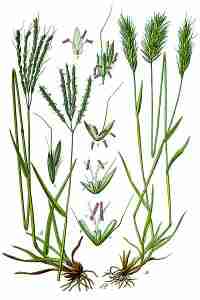 Bergamoss opens with the promised “berg” of bergamot. The citrus quotient is doubled with orange added which provides a juiced up “berg” to start things. The heart is where things really come together. Ms. Aftel employs a particularly juicy peach in combination with citronellol and nutmeg for the heart. Nutmeg has a wonderful spiced sweetness which opens up the sweeter qualities of the citronellol and peach while also providing necessary grounding effects. After the first two acts we finally get to the “real” stuff. The base of Bergamoss is the “amoss” from the name and much more. The note which leads you into the base is called flouve absolute. Ms. Aftel says in the press release it is from the tops of French sweet grass. She also says it can be chameleon-like in a fragrance and the base of Bergamoss does have a seemingly shifting frame of reference and I am going to chalk that up to the flouve. The core of the base is real oakmoss and antique civet. Coumarin provides a bridge between the muskiness and the woody green. That leaves the flouve to provide the grace notes which it does throughout the great majority of time Bergamoss is on my skin. It goes from narcotic sweetness to intense greenness. This makes Bergamoss feel in constant motion.

Bergamoss lasts 6-8 hours and has almost no sillage to speak of.

Bergamoss is going to be one of those perfumes where my already high estimation of it only climbs higher the more I become familiar with it. Ms. Aftel has put the “real” stuff in a really excellent perfume. Dip your finger in and find your personal olfactory bliss in its intimate excellence.

Disclosure; this review was based on a sample provided by Aftelier Perfumes.