I have a fond spot for Acqua di Parma Colonia. It was one of my earliest niche purchases and I wore the heck out of a bottle over one spring and summer. It I was forced to consider owning one fragrance the original would be on the list of finalists. Acqua di Parma has been releasing variations on the original Colonia formula starting in 2003 with the equally memorable Colonia Assoluta.

In recent years, the brand has started a sub-collection of Colonia flankers where a specific named ingredient is grafted on to the Colonia architecture. It worked quite well with last year’s Colonia Quercia where the “quercia” (oakmoss) provided a bite to the base of Colonia. When it misses; the Colonia components overwhelm the added ingredient. 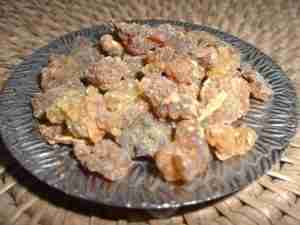 Myrrh on a Plate

I received the two flankers for 2017; Colonia Ebona and Colonia Mirra. Colonia Ebona is a case where the dark ebony wood is lost within the best parts of Colonia. I had high hopes for Colonia Mirra because myrrh seemed like a note which would be an excellent complement to that which I love about Colonia. Imagine my surprise to find no Colonia in Colonia Mirra. There is lots and lots of myrrh but if you’re looking for anything to do with Colonia you’ll need to look elsewhere.

It is an interesting tack to take as Colonia Mirra is nothing much more than a myrrh soliflore. I like myrrh because of the sweet underpinning to it. In Colonia Mirra it is displayed as any keynote in a soliflore is. The myrrh here is good enough to be the centerpiece. There are some supporting notes; mainly nutmeg as a spicy signpost to the sweeter aspects. Patchouli is used in a similar role to focus the resinous core of the myrrh.

Just to make sure there was no hint of Colonia hiding under the myrrh I actually tested them side by side hoping the original would facilitate my nose to discover it underneath it all. It didn’t. When I say, there is no Colonia here I mean it. If you’re inclined to purchase this because of a myrrh-infused Colonia; think again. If on the other hand, you are one who enjoys the warm sweet resinous beauty of myrrh Colonia Mirra is a good version of that.

Disclosure: This review is based on a sample provided by Acqua di Parma.