There are some perfume notes which I think are problematically labeled as “cheap”. Cherry is one of those; the result of being the ingredient of too many plug-in air fresheners. It means more opportunity for perfumers to find gold within the dross. There aren’t a lot of cherry perfumes I own but the ones I do show the previous assertion is true. Here are my five favorites.

The People of the Labyrinths Luctor et Emergo– Before perfumer Alessandro Gulatieri would go on to found his Nasomatto line, he caught the attention of many perfume lovers with this gorgeous experimental fragrance. He at first uses a strong cherry but wraps it in an artificial cellophane accord. Then he embeds it in a Play-Doh casing for a different kind of artifice. One of the earliest groundbreakers in niche perfumery.

Serge Lutens Rahat Loukoum– Perfumer Christopher Sheldrake also uses cherry as a keynote in the top accord in this release to help further define the nascent gourmand style of fragrance. He takes a marzipan almond and matches it to a syrupy cherry liqueuer. Based on the Turkish Delight confection it eventually heads deeper into sweet confectionary territory, but it is always the cherry-almond opening which stays with me. 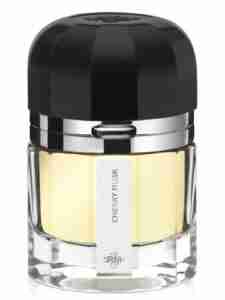 Ramon Monegal Cherry Musk– This is a perfume which simply lives up to its name as perfumer Ramon Monegal takes a concentrated cherry followed by a cocktail of white and animalic musks to provide a fascinating counterbalance. It is very strong and some days I’m not up for it; on the days I am spraying it on I like being swept away by it.

Beyonce Heat Rush– Within the celebuscent category Beyonce has produced a better than average collection since 2010. I liked the original Heat but the one bottle I own is the second flanker Heat Rush and it is all down to the cherry note. Perfumer Honorine Blanc re-works the fruity nature of Heat as she uses a top accord of cherry, passionfruit, and orange instead of the peach of the original. It turns this into a summer party.

Prada Candy Gloss– Perfumer Daniela Andrier completely leaves behind the formula from Candy for this flanker. It revolves on an axis of cherry, orange blossom, and vanilla. This is a transparent version of those usually heavy notes full of effervescence. I have come to like it better than the original.

Disclosure: These reviews based on bottles I purchased.