Perfumer Francis Kurkdjian is one of the elite perfumers working currently. He burst upon the perfume scene in 1995 as one of the perfumers behind Jean-Paul Gaultier Le Male. His career would only trend upwards from there. M. Kurkdjian has made a large number of perfumes I think rank among the very best. In 2009 he started his own line, Maison Francis Kurkdjian. From the initial seven releases to a collection which now numbers twenty-seven fragrances it is one which has always had my attention. I have realized over the last couple of years that it is with this brand where I will start somebody off who is dipping their toe into the niche perfume sector. The perfumes which make up the collection carry a baseline classicism which I think is why they are such appropriate entry level choices into niche. These are the five perfumes I usually take someone through when introducing them to this brand.

One of the first seven releases Aqua Universalis lives up to its tag line of a “A scent for all things”. This is the best clean musk perfume I own. M. Kurkdjian uses a selection of citrus matched to lily of the valley as his come-on. The base has a few sheer woods along with a blend of white musks that M. Kurkdjian has become known for. In Aqua Universalis it all comes together. When I am showing this brand to someone new to niche this is the bottle that most often is purchased. 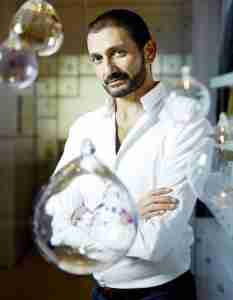 In 2012 the oud craze had reached its heights. Every time I saw oud in a new release I inwardly said, “Please no more”. The problem was the early oud fragrances were using oud as something to represent exoticism. 2012 would see the end of that as some of the best perfumers began to use oud in constructs which showed its versatility. The simply named Oud was one of those. M. Kurkdjian has a way of tweaking something classic and making it seem contemporary. With Oud he was able to take a note which had usually been used as a wrecking ball, transforming it in to something less pulverizing. By using saffron, cedar, and patchouli along with a Laotian oud which imparts a more delicate profile; containing interesting grace notes which M. Kurkdjian teases out. Oud will make you believe the wrecking ball has become a brilliant fragile crystal ball.

Masculin Pluriel is the best example of M. Kurkdjian’s way of re-interpreting classical styles. Here he takes the fougere and makes it his own. It starts with a single source of lavender that is herbal and green as well as floral. It is so good M. Kurkdjian keeps the rest of the development simple. Cedar, patchouli, and vetiver are the usual fougere components. The fabulous leather accord also present is not. It is that which contemporizes Masculin Pluriel.

When I tried the original 2013 release Aqua Vitae I wanted it to have more heft. Two years later M. Kurkdjian granted that desire with Aqua Vitae Forte. A fabulous mixture of spices, citrus, orange blossom, sandalwood, and vetiver. It is as easy to wear as an old pair of jeans. As I have only had a year to introduce this to people when I take them through Maison Francis Kurkdjian it seems like Aqua Vitae Forte is finding as many admirers from the novice niche users as Aqua Universalis.

These five are where I think you should start but this brand has many more advanced delights once you delve deeper. It is one of the stronger collections currently on the market.