Two years ago, Le Labo was acquired by Estee Lauder. The brand started in 2006 by Fabrice Penot and Edouard Roschi had grown into such a presence within the niche sector it wasn’t really a surprise. Le Labo made a mark in the burgeoning niche market by being unafraid to do something daring. The name of each perfume has a note and number. The digits represent the number of different ingredients. The note; well sometimes it is what you smell and other times it is just a supporting player. This is a brand which I have enjoyed from the moment I first tried them ten years ago, the distribution of Le Labo is beginning to expand a bit because of the new partnership with Lauder. Thus, I thought because they are going to become more readily available it was time to let you know which five should get you started.

Before I start the list I am not going to include the city exclusives. Le Labo has perfumes which they only sell in a particular city. The Tokyo release Gaiac 10 would have been a cinch to be on this list but because of the exclusivity I am not going to add it.

Ambrette 9 composed by perfumer Michel Almairic is sometimes called Baby Ambrette 9 because it is so pure and simple it could be used on a baby. This time the botanical musk of ambrette is front and center. It was my experience with this perfume which opened my eyes to the soft beauty of ambrette. M. Almairic uses pear and other synthetic white musks to get up to nine. When they call something baby soft this a fragrance which exemplifies it. 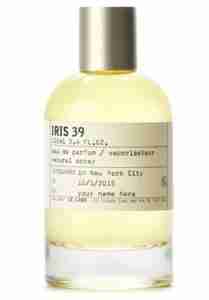 Iris 39 by perfumer Frank Voelkl is an example of where the other 38 notes create something quite different than a perfume named Iris 39 should smell like. M. Voelkl wanted to remove the powder and accentuate the rootiness. The main ingredient he uses for this is patchouli. The full-bodied patchouli provides the earth that the iris rhizome is buried in. A bit of lime brightens the early moments while a mix of civet and musk take Iris 39 deep into the topsoil. If powdery iris has always turned you off let Iris 39 provide a fresh perspective.

Santal 33 also by perfumer Frank Voelkl is one of the flagship perfumes of the brand. It was meant to evoke the rugged Marlboro Man of the cigarette ad campaign of the 1970’s. It is a primary mixture of leather and sandalwood. Ambrox and cedar pull the woody aspects. Iris, cardamom, and papyrus layer the leather. By the end, it is the Ambrox and sandalwood which remains. Santal 33 is a perfect example of what Le Labo Is all about.

Lys 41 also composed by M. Voelkl is not a lily fragrance it is a duet around jasmine and tuberose. Most of the lily character comes from the inclusion of Tiare which has the ability to twist the boisterous white flowers into a simulacrum of lily. The base accord is built around a very comforting vanilla surrounded by woods. There are other stronger florals within the line Lys 41 is the gateway to discovering them.

I finish with the other flagship scent of the brand Rose 31 by perfumer Daphne Bugey. I hesitated to include this because Rose 31 is a masterpiece of perfumery but it is not as welcoming as the other four on this list. I decided to include it because there is no Le Labo perfume which captures the brand aesthetic better. I like describing Rose 31 as an English Tea Rose who falls in with a group of bad influences which leave that rose taking a walk of shame the next morning. Mme Bugey opens with that dewy rose until cumin, oud, and vetiver invite her out for a spin. By the time she returns home she has transformed in to a Bulgarian rose trailing the spices of the night before as she stumbles in the door. Rose 31 is one of the great perfumes of this century which is why you should allow it to be one of the perfumes which opens the door to the brand.

Take these five out for a sniff when you see them on a shelf near you.