Day 3 began with a lecture by Michael Edwards of Fragrances of the World capturing the last ten years of the Artisanal Fragrance sector. I knew the market had really taken off over the last ten years. In 2006 there were 261 new artisanal releases. In 2016 there were 874 new releases. That’s not total that’s added to what was already there. Mr. Edwards challenged the brands who were in the room to look for opportunities to strike out in different places. He illustrated the point by showing that over a third of these new releases are florals. There is room for artistic expression in this sector and Mr. Edwards is one of the few who can show the hard numbers. It was a fantastic way to begin the day. 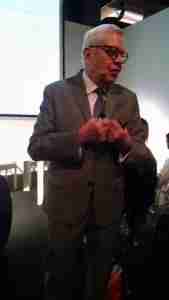 The next stop of Esxence 2016 was three years in the making. At Esxence 2013 perfumers Mark Buxton, Bertrand Duchaufour, and Geza Schoen announced they were teaming up for a project together. Finally Project Renegades has arrived where each of these gifted perfumers created a personal fragrance of their own. When I asked them what took so long the answer were those magnetic heads on the front of the bottles you see below. Each of them had their face scanned in 3-D to replicate their features as renegades. They were worth waiting for because I will never not see these three without a cowboy hat from now on. The perfumes are pretty great too. 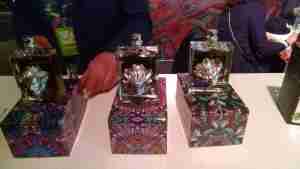 Next I visited with Sophie Gabriel and perfumer Alexandra Monet of The Different Company. The new release Adjutay comes from creative director Luc Gabriel’s life. On a trip he left some fresh tuberose in his leather suitcase. When he took it down again he was greeted with a mix of tuberose and leather. Mme Monet has recreated that visual spectacularly. The leather accord encases the rich tuberose. Easily one of my favorites.

Last year Maria Candida Gentile put a rose with elephants on Africa. For 2016 she takes inspiration from Marcel Duchamp for Rrose Selavy. This version of a rose by Sig.ra Gentile is nothing but rose as every part of the plant and no less than five different extracts of the flower itself are combined into a rose worthy of its inspiration.

Nishane Isatanbul had two new releases but the Shisha bar in a bottle called Fan Your Flames did just that for me. Tobacco, rum, and spices made me feel like I was relaxing in an easy chair, hookah next to me.

It was getting late and I had had a couple of my fellow bloggers tell me not to miss the new brand Homoelegans. I was greeted by the owners and creative directors Francesco Gini and Mauricio Piazzi. They have started their effort with two releases Tadzio and Quality of Flesh. The latter is inspired by Francis Bacon and how much of his artistic work was done in triptych. Of course perfume is also done in triptych with a top, heart, and base. Quality of Flesh represents that with three well-built accords focused around juniper berry, narcissus, and leather.

I was at the end of the day and as always it was difficult to say arrivaderci to my perfumed family. After making one final round of the exposition to get my final hugs I walked out into the evening sunlight. Arrivaderci Esxence, see you next year.