One of the things about the Holidays is it is one of the times of the year when fragrance is placed front and center at points of sale. I was reminded of this when standing in line to check out. There always seemed to be a display of perfume minis near the cash register. I spent a lot of time looking at the selection of perfumes in those plastic packages. I thought about how I had written about almost all of them over the three years of doing Discount Diamonds. That time was well-spent because there was one which I haven’t written about and it is sort of the epitome of what this column is all about: Zino Davidoff. 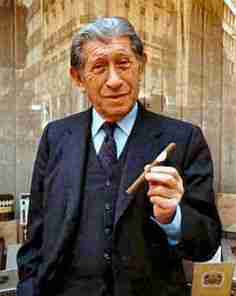 In 1988 the Davidoff brand ensured its place in the perfume hierarchy with the release of Cool Water. Two years earlier Zino Davidoff was released and it is the polar opposite of Cool Water. Named after the man who steered the Davidoff tobacco enterprise from 1912 until his death in 1994. It isn’t clear why in 1980 they entered the luxury goods market from their position as tobacco purveyors. Fragrance was one of the earliest parts of that expansion.

Zino Davidoff was the second fragrance release between the now-discontinued Davidoff and Cool Water. I knew about the perfume before I knew about the man behind the name. What I find interesting is a brand which was founded in tobacco has never released a tobacco perfume. Zino Davidoff is a powerhouse Oriental. The perfume was composed by a trio of perfumers; Jean-Francois Latty, Michel Almairac, and Pierre Bourdon. It was kept simple but each phase is excellently done.

Zino Davidoff opens with a particularly prominent bergamot opposite lavender. This is a classic top accord and the lavender matches the bergamot precisely. The heart is rose made a shade greener by geranium followed by patchouli. Again, patchouli and rose is not an unheard-of combination but it is executed professionally here. It all comes to an end with sandalwood, amber, and musk.

Zino Davidoff has 14-16 hour longevity and above average sillage.

Zino Davidoff is collection of accords you’ve smelled previously. What sets it apart is the perfumers mange to put them together in a way which makes it feel classically new. Even now thirty years on it doesn’t smell dated. You can find it as a mini for $5 which is a great deal. A full bottle is easily found for around $20. This is a fragrance which glitters as bright as any of the previous Discount Diamonds.