I still go scavenging at the local discounters still hoping to find something unexpected. Most of the time I just replenish some of my favorite Discount Diamonds. At the end of the summer I saw something different down at the bottom of the giant Bin O’Fragrance. I patiently dug down to see what it was. I saw a plain white box and was hoping it was a tester which got mixed in. Many of my best scores have been the odd tester which gets caught up with the lots. Which explains my motivation to dig down. When I got to the bottom I saw it was not a tester the plain box had a professional logo which read “Vera Wang for Men”.

I remembered Vera Wang for Men as being the topic of discussion on the perfume forums back in 2004 when it was released. I went back and looked and the consensus was that it was derivative being easily compared to other fragrances which were judged as better. That kind of opinion probably kept me from trying it when I was at the department store, at that time. Now, usually when I am reviewing something I don’t have any idea about the overall opinion towards it. But as I was in line with the bottle I was reading the old reviews on my phone. Once again I almost let it stop me but for $9.99 I was curious to see whether I agreed. It took me some time to finally get around to opening the cellophane and checking it out. What I found was an office-ready amiable leather and sandalwood fragrance. 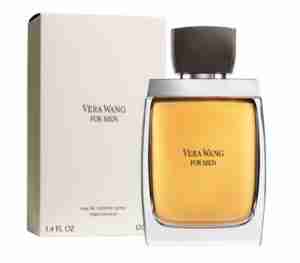 Vera Wang for Men was composed by a team of perfumers; Jean-Marc Chaillan, Olivier Polge, and Pascal Gaurin. It is difficult to find what brief they were given. All the ad copy was about being the “irresistible fragrance that becomes the signature of the man who wears it”. That could not be the instruction the perfumers were given. Whatever they were told they did put together a pretty traditional fragrance of masculine themes of citrus, leather and wood. As I spent some time with it I found this to be a good version of those themes.

One of the nice things was using a tarter version of citrus by going for yuzu which has a distinct thread of green. Mandarin leaves were used to make sure that thread was noticeable. The leather accord is straight forward but with nutmeg used to tease out the sweeter parts of it. The base is sandalwood, tobacco, and vanilla. These are all there but this is where a little more volume might have made this even better.

Vera Wang for Men has 8-10 hour longevity and moderate sillage.

For all the notes which could have produced a boisterous vapor trail leaving perfume Vera Wang for Men is much more mannered than that. It is that which I think has allowed me to enjoy it more than those who previously encountered this when it was released. I did some checking online and you don’t have to perform discount bin archaeology; Vera Wang for Men is readily available at many stores for a discount price.