There are so many signals that summer has ended and fall has arrived. The temperature is obvious but there is also a crisp edge to the air I breathe in. It makes itself evident in food and drink as pumpkin spice invades everything. September is always a transitional month for me because I will still get very warm days but they are often paired with chilly mornings. The summer fragrances don’t feel right on those chilly mornings but I also don’t want my heavier ambers of autumn to be hanging around by the end of the day as things have gotten much warmer. I have a go-to set of perfumes for these days of transition which manage to capture this shoulder season between summer and fall. When I want an amber for this time of year I turn to L’Occitane Eau des Baux.

Many of you might walk by the L’Occitane store in your local mall and be unaware there are some pretty great perfumes lurking behind all of the bath and beauty products. They have released just over a hundred perfumes since 1996 always at a really good price point. For this series it skirts the $50 limit but I regularly have found it on sale for under that price and so I’m bending the rules a little bit. 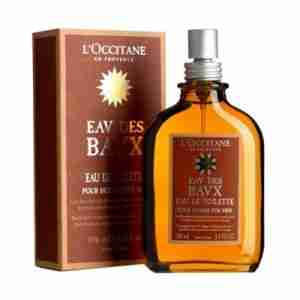 Eau des Baux was released in 2006 and was composed by perfumer Karine Dubreuil. The other L’Occitane releases for the year had been firmly on the lighter side as green tea, orange, and verbena were the focal points of the earlier 2006 releases. Eau des Baux was meant to be a bit sturdier fragrance. If there was a hallmark at this time in the L’Occitane collection it was a sort of lighter style of fragrance. That would become less prevalent over the next few years but Mme Dubreuil was most likely tasked with making a lighter Oriental. Eau des Baux turns out to be exactly that.

Eau des Baux opens with a creamy green woody accord of bergamot, birch leaves, and fig tree. The bergamot provides the citric core for the rough green quality of the birch leaves to push against. The soft woodiness of the fig tree accord fits between the two notes as if it was meant to be. In the heart the amber accord comes together and it is surrounded by cinnamon and incense. This is a warm amber but it never gets too strident. The cinnamon and incense are also kept from becoming too prominent as well. The base is a clean woody palate cleanser of cedar sweetened with a bit of vanilla.

If you’re looking for an amber version of that light sweater you wear on September mornings I think Eau des Baux fits the bill. Make a stop at L’Occitane the next time you’re at the mall you might be surprised at what you find in the fragrance section.