In previous entries of this series I’ve told the story of perfumes which have failed because they couldn’t find their audience. This time I’m going to tell you about a perfume which had two opportunities separated by 50 years to try and find its audience. That it was the product of two of our greatest creative minds, Elsa Schiaparelli and Salvador Dali, makes it all the more noteworthy. 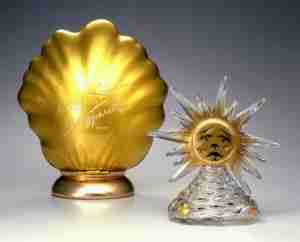 The story of the perfume called Le Roy Soleil starts in 1947 as Mme Schiaparelli wanted to celebrate the end of World War II with a perfume which paid homage to Louis XIV. For the bottle she turned to her collaborator of over ten years, Salvador Dali. As you can see in the picture above the bottle was housed in a hinged seashell which contained a bottle topped with a sun containing a face etched onto it. This was released in a limited edition of 2000. The bottle was produced by Baccarat. It will surprise nobody that the bottle has become one of the most desired for perfume collectors. The disappointing part of all of this is the perfume inside the bottle is an afterthought. I can find no record of the perfumer who worked on it. It is described as “luxurious”, “regal”, and “devastating”. I did buy some of the juice in a 1946 bottle from the person who won an auction for it. It had clearly been exposed to the air and sunlight too long as all that remained was a muzzy vanilla and musk. 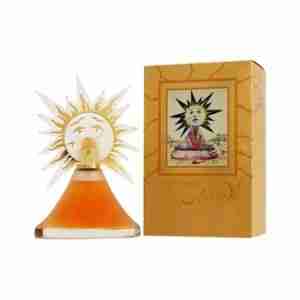 Fifty years later, in 1997, the perfume line which carried M. Dali’s name announced the release of Le Roy Soleil. According to the press release it was based on the original as re-interpreted by perfumer Philippe Romano. This is the version I first experienced. Le Roy Soleil in 1997 was all about pineapple in the early going. M. Romano could have tried to show some restraint but instead he turned the top notes into a fruit fiesta as papaya, apricot, and lemon join the party. These top notes reflect the incredible brilliance of those fruits exploding to life. To turn down the sunshine cinnamon and clove grab ahold of it and shade it a tiny bit. Rose and jasmine add a bit of different shading. Pineapple is one of those odd perfume notes which is far too easy to make syrupy and overwhelming. M. Romano finds a way to avoid that making it light and bright. The base notes are a set of transparent musks over vanilla and sandalwood. This part shares some similarity to what I smelled in the 1947 spoiled sample.

Why did the 1997 version fail? I was unable to find a reason in my research. It definitely wasn’t because the packaging wasn’t spectacular as you can see the 1997 bottle was also quite beautiful. I am going to speculate it is the pineapple which typical consumers don’t appreciate as much as I do. If I ever tried to make a list of top 10 pineapple perfumes ever I think I’d struggle mightily to fill that list up. It isn’t even the aesthetic as Le Roi Soleil Homme released a year later is still in production. As hard as it may be to believe Mme Schiaparelli and M. Dali couldn’t quite shake up the perfume world in the same way they did the fashion world.

Disclosure: This review based on a bottle of 1997 Le Roi Soleil I purchased.