Because I’ve been so interested in the trend of perfume brands reaching out to Millennials this year I’ve been looking back to find other times fragrance was designed to specifically capture a young market. It will not surprise anyone that a good example would come from Calvin Klein. For almost 40 years now this has been a brand all about finding appeal for the young consumer. In 1994, with ckOne, they were perfectly positioned to ride the swelling wave of cleanliness in fragrance long before it turned in to a tsunami. By 2002 they were ready to do it again with Calvin Klein Crave. Except this time, it was one of the rare fragrances for this brand to end up in the Dead Letter Office.

As the brand was looking out at their target audience they were seeing the beginning of the wireless age. Nearly every young person had a pager hanging from their belt while the early cell phones were just starting to penetrate society at large. Creative director Ann Gottlieb wanted to oversee the creation of a perfume which would capture this connected generation on the bleeding edge in 2002. 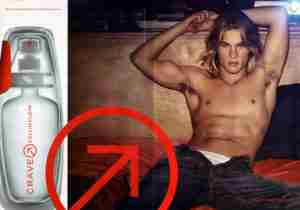 Ms. Gottlieb assembled a group of four perfumers in Jean-Mark Chaillan, Olivier Polge, Pascal Gaurin, and Yves Cassar. The perfumers were given the brief I think all Calvin Klein perfumers are given, “make it young, fresh, sexy, and clean”. Except with the concurrent electronics modernity in mind it drove them to think a little more outside of the box than they might normally have done. What resulted was something that seems Calvin Klein but at other moments seems like the name on the label must be incorrect.

Crave opens with some of that unusual quality right away. The perfumers use a Calone-laden “fluorescent fresh accord”. There is so much Calone here that the melon-like quality of that aromachemical is also evident. To that the perfumers add a different fruity partner; carambola, or starfruit, which has a tart smell to it but not nearly as much as a citrus note would have. That actually turns the fruitiness of the melon and the carambola into its own sort of fluorescent fruit accord. To all of this there is a strong green counterpoint. The longer this lingers on my skin the sugarier the fruit gets and just as it is about to become Kool-Aid the perfumers unleash a spate of herbs as basil, coriander, and allspice come forward. For a little while this is a like a chaotic house party as the fresh of the Calone, the fruits, and the herbs whirl madly. Again just as it threatens to become annoying the base notes try and calm things down. Crave goes all woody as sandalwood and vetiver provide the calming effect needed while the typical mixture of white musks finish this off.

This is a perfume which lives life on the edge of irritating. If it stays on the right side of the line, as it does with me, it is a fun fragrance. If it falls on the other side of that line this is going to be an irritant. It seems the consumers were in the latter category as three years after launch it was pulled. It is still the quickest discontinuation for the brand.

There is a bit of cautionary tale in Crave for all of those brands trying to figure out what the Millennials want. Even an all-star team can miss the mark by trying too hard to cater to a perceived taste.