I know my first exposure to Mysore sandalwood came courtesy of Crabtree & Evelyn in their original Extract of Mysore Sandalwood. This might have been one of my earliest exposures to the concept that raw materials make a difference. As is well documented the precious Mysore sandalwood was over harvested and the Indian government had to step in and protect the remaining trees before the predations of perfumistas eradicated it. For most of the years right after that the huge majority of sandalwood in perfume was synthetic. Recently there have been sustainable groves of sandalwood being grown in Australia from the same genus Santalum Album. The plantations are concentrated in Western Australia which is supposed to have a similar microclimate to India. These farms are now producing sandalwood oil for perfumery. Extract of Mysore Sandalwood was a big seller for Crabtree & Evelyn and so they bit the bullet and created Sandalwood in 2004 when they could no longer source the titular ingredient. Sandalwood was surprising in how good it was even though it was an all synthetic version of sandalwood. Now in 2014 Crabtree & Evelyn have released Indian Sandalwood which has listed as an ingredient Santalum Album. I loved the 2004 Sandalwood for the nifty sleight of hand it pulled in creating something worthy of its predecessor based on synthetics. Would the 2014 Indian Sandalwood be more like the original Extract or a “real” version of the Sandalwood? 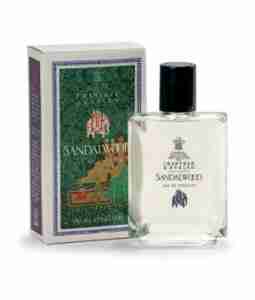 2004 Sandalwood was almost miraculous in the fact that it didn’t smell overtly synthetic. Sure if you truly focused intently on it the truth became apparent but if you just wore it the scent was really fantastic. The perfumer was able to recreate the slightly spicy quality of Mysore sandalwood by using lavender, violet, amyris wood, and vetiver. I really wish I could find out who the perfumer(s) were behind this. Even wearing it now I am surprised at how very good this is. Sandalwood remains a beautiful example of the perfumer’s art when working with a restricted set of ingredients. 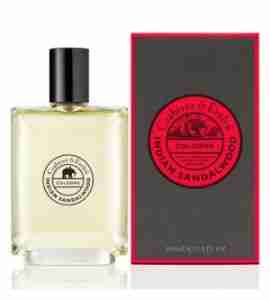 2014 Indian Sandalwood shows how well done the 2004 version is, as this new version which does contain real sandalwood smells very close to the older version. This time I do know the perfumer behind Indian Sandalwood, Ashley Wilberding. Ms. Wilberding isn’t hampered by having to form an illusion. Her task is different, to add complementary notes to allow this nouveau sandalwood to expand and feel as if it was much older and refined. She also chooses to use amyris, lavender, and vetiver. Cypress and cedar extract the woody quality of the sandalwood and a judicious use of cinnamon adds the characteristic spiciness of the best Indian sandalwood. Ms. Wilberding does a fantastic job at allowing her raw material to shine to its fullest.

This should be a slam dunk win for reboot, synthetic vs. real, c’mon. I do prefer the reboot because there is nothing that can take the place of real sandalwood in a perfume. This new version of Indian Sandalwood is excellent. For those who want to ask whether it is as good as the Extract of Mysore Sandalwood, it isn’t. But it isn’t like comparing Kobe beef to a Big Mac. It is more like comparing it to a dry-aged USDA Porterhouse. Truly all three of these perfumes are great examples of sandalwood fragrances even if they all come from different places.

One last thing to mention is the price of this new release $45 for 100mL. It is crazy good for that price; a real bargain.

Disclosure: this review is based on bottles of all three fragrances I purchased.